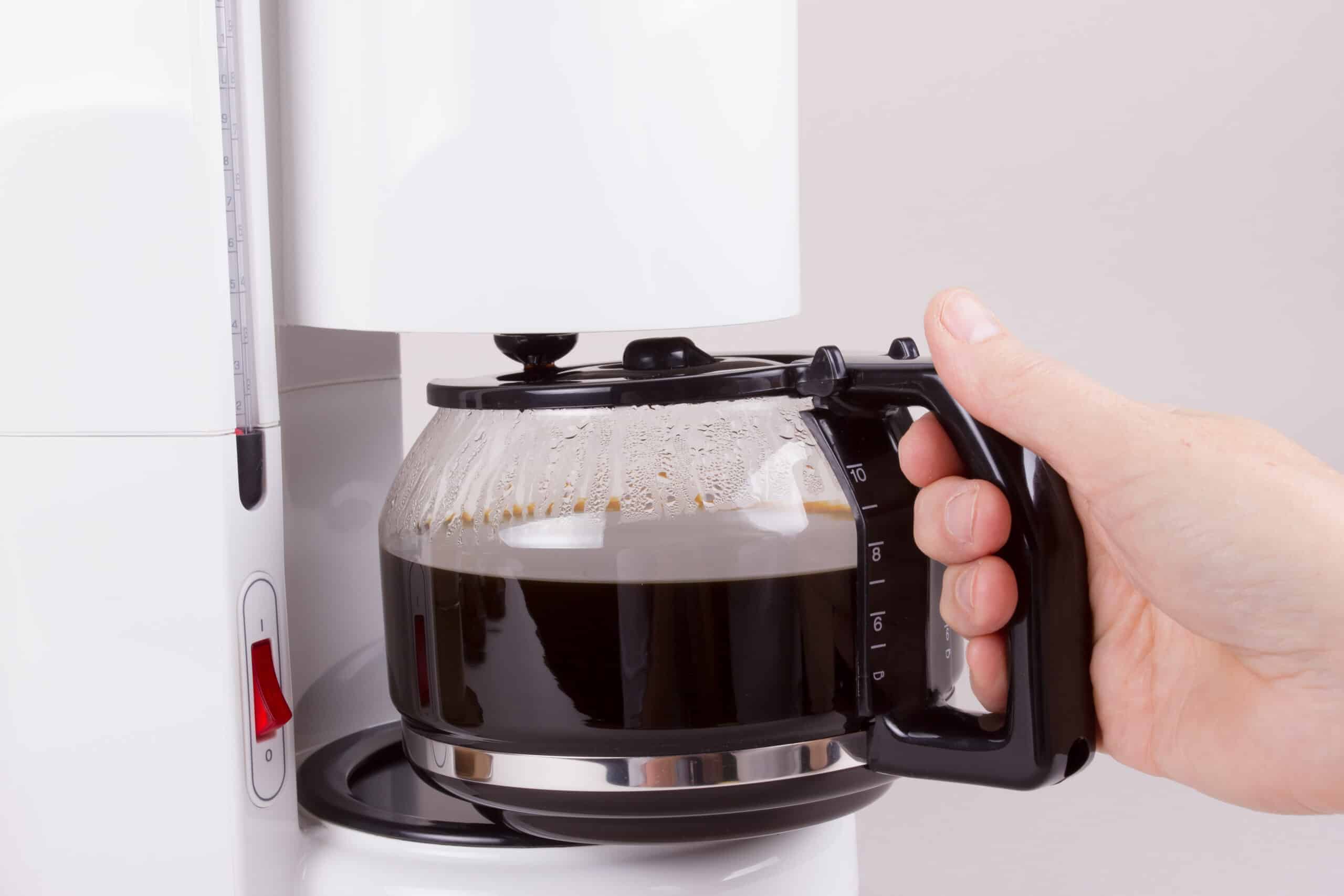 As much as we wish they did, coffee pots do not last forever. The time will inevitably come when you have to retire your current coffee machine and buy a new one. How often should you do this?

Most coffee drinkers replace their coffee pots every two to five years. Higher-end coffeemakers can last up to 10 years, but that’s the longest you should keep your coffee pot.

In this article, we’ll tell you everything you need to know about replacing your coffee pot, from more information on how often to do it as well as the risks of waiting too long. We’ll even share our best tips for buying a new coffeemaker, so keep reading!

How Often Should You Replace Your Coffee Pot?

Each morning, your coffee pot works hard to brew you a hot, steaming, flavorful mug of coffee. Well, until it doesn’t. Or maybe there’s nothing wrong with your coffee pot (at least for now), but you’ve used it daily for several years and wonder how much more it can take.

The longevity of a coffee pot varies by model. You should expect to get at least two to three good years out of your coffee machine. For most people, that’s about 1,000 cups.

After that, issues might arise with the coffee pot that will make you start to think it’s time for a replacement. By the fourth year, you might have bought a new coffeemaker, or perhaps it’s by the fifth year.

In some instances, especially for very high-end coffee machines, you might have as many as 10 years with the same coffee pot. That isn’t the norm though, so expect two to five years on average.

How will you know when the time is right for a new coffee pot? You usually won’t have to guess, as your coffee machine will tell you. Here are some signs that you might currently encounter with the coffee pot or soon will.

To prove that, you have to look no further than the coffee pods your coffeemaker uses. When you first bought your coffee pot, you could find the pods at just about any grocery store, sometimes retail stores too. Online, you could order any flavor you wanted in bulk.

It’s more than yesterday’s news; it’s news from several years ago. That might as well be eons.

In a situation like this, you’re sort of strong-armed into buying a new coffee pot or else you can’t use yours anymore, especially if it only brews coffee pods.

The days of your coffee pot producing piping hot water seem to be done. You can’t pinpoint exactly when it happened, but these days, you’re lucky if you get lukewarm water. Some days, the water is even cool.

Without hot water, you’re not getting coffee, end of story. The optimal temperature range for your coffeemaker should be 195 to 205 degrees Fahrenheit.

While sure, you could replace a faulty heating element, this is going to be costly. Plus, that’s assuming that you can even find the part for the coffee machine. Depending on how old your coffee pot is, all its parts might be long out of production.

It Doesn’t Work at All or Works Sporadically

You deserve to wake up each morning and have a reliable cup of coffee before you start your day. If your coffee pot works in fits and spurts, then you can never say with certainty whether you’ll have a good cup of coffee or a lukewarm disaster.

If you find yourself at Starbucks or your local café every morning to buy coffee, think of how much money you’re spending week after week and month after month. You probably could have bought a new coffee pot several times over by now!

Your coffee pot has some problems, but you don’t think it’s the end of the world. After all, about 75 percent of the time, your coffeemaker brews good coffee. It’s not totally reliable, but it’s still working, so why get rid of it?

If the last section doesn’t have you completely convinced to replace your old coffee pot, then we hope the information in this section will. Here are the risks you face when you hold onto an antiquated coffee pot.

You clean your coffeemaker, or at least, we hope you do. If you’re only running the hot water clean cycle though, it might not be doing as sufficient of a job as you would have assumed.

This Fox 13 article mentions that a coffee pot that’s only cleaned with hot water can harbor mold, yeast, and bacteria.

The longer you own your coffee pot, the greater the buildup of germs and bacteria. That increases the likelihood of you getting seriously sick from brewing and drinking your morning cup of coffee.

Yeast and bacteria aren’t all that accumulate within your coffee pot the longer you have it. So too can scale, which is a buildup of minerals such as calcium and magnesium.

The minerals in small quantities might not affect the quality of your cup of coffee, but after months of buildup? You’re certainly going to taste the difference, and not in a good way.

Even without scale, as the components of your coffeemaker get old, they stop working as well as they once did. The barely functioning parts too can muddle up the brewing and thus the taste of your coffee.

Coffee pot parts failure isn’t only a risk in that it can create bad-tasting coffee, but there’s always the potential for fire as well. Scale buildup can also contribute to fire risk.

Tips for Buying a Coffee Pot

After reading to this point, you’ve decided to replace your current coffee pot with a new model. Here are some shopping tips that will ensure you’re happy with your purchase!

Think of Your Current Coffee Tastes

Besides your own personal preferences, you need to ensure your new coffee pot’s brew time is compatible with your schedule. For instance, if a coffee machine can brew a fabulous cup of coffee, but it takes over 20 minutes to do so, that’s probably not going to gel with your weekday routine.

You’d either have to wake up earlier or skip making coffee altogether, saving your luxurious coffee for the weekends only.

Some people might have 20 minutes to spare for coffee in the morning while others need caffeinated goodness brewed and ready to go in two to five minutes. There are coffeemakers for both parties, but please research brew times before you commit to a new coffee machine.

Be Clear about Brew Capacity

For some, they can get by on one cup of coffee at home in the morning. Maybe they drink a second cup at work between starting time and lunchtime or perhaps they don’t. Others though can’t even see straight until they have at least a cup or two of coffee.

If you drink coffee like it’s an IV drip, then you must buy a coffeemaker that can brew cups commensurate with your needs. Many coffee machines offer models with increasingly higher brew capacities, such as five cups, eight cups, or even 10 cups.

If your counter is crowded, then you can’t really afford a bigger coffee pot than the one you have now. Measure the coffee pot’s size or your counter and then shop for a coffeemaker within those parameters.

If you’re browsing online listings, remember that some measurements might include the packaging too, not just the coffeemaker.

The last consideration when buying a new coffee pot is price. Cheaper coffee pots are rarely better; they’re made of equally cheap components that break quickly. You might save money on your coffee machine now, but when it breaks down in six months and you have to replace it, you’ll feel foolish.

That doesn’t necessarily mean you need to purchase the most expensive coffee machine on the block. Determine your budget and then begin researching coffeemaker prices. A machine that fits within your budget, matches your personal tastes, brews as many cups of coffee as you need, and makes coffee quickly is the winner.

The average lifespan of a coffee pot is anywhere from two to five years, with some lasting even double that. Keeping your coffee machine clean (deep-cleaning and descaling it) is a good way to put off replacing it, but no coffeemaker is forever, as we said.

When the time does come for you to buy a new coffee pot, we hope the information in this guide helps you make a great purchasing decision!