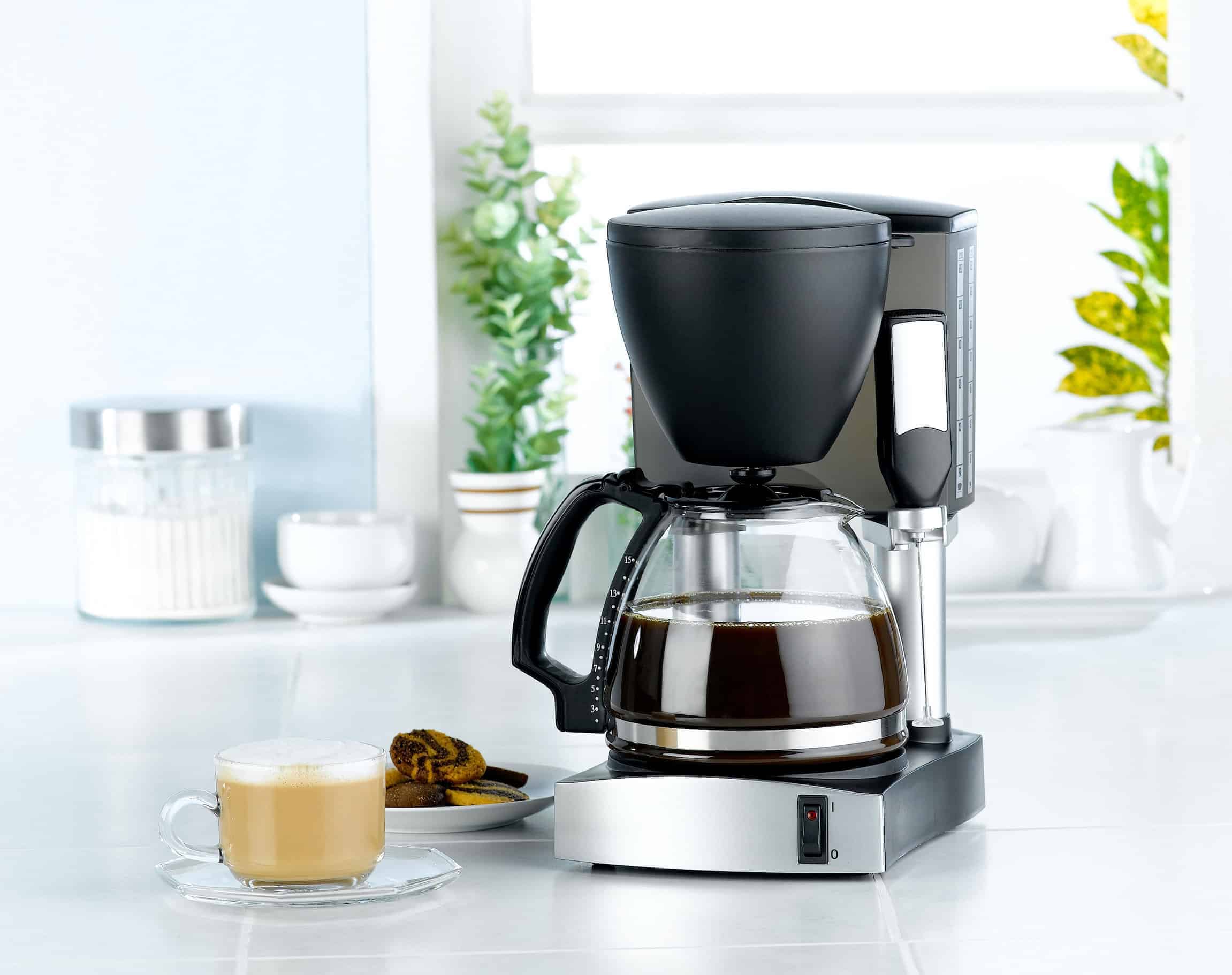 You had a bit of a hectic morning, but you tried your best to stick to the routine. Once you get to work, you can’t shake the feeling that you forgot to do something back home. After a bit of thinking, it hits you. You didn’t turn off your coffee pot. Now what?

At the very least, a coffee pot that’s accidentally left on can burn the coffee inside. If the pot is empty, then the pot itself could sustain burn damage depending on how long it’s on. At worst, forgetting to turn off your coffee pot could lead to a fire.

In this article, we’ll talk further about the consequences of leaving your coffee pot on when you’re not home to turn it off. We’ll also share a few auto-off coffee pots that are perfect for preventing these kinds of situations. Make sure you keep reading!

The Risks of Not Turning Off Your Coffee Pot

At first, once you realize it’s your coffee pot that you left on, you might be able to breathe a sigh of relief. After all, it’s not like you left your garage door gaping open or you forgot to lock up before you left for work.

A coffee pot that’s on but not being used is anything but a small deal. The following risks prove it.

Coffeemakers require 750 to 1,200 watts to run per hour. Although the average cost of electricity for a drip-filter coffeemaker is about $7.30 a month if you use it daily, that’s assuming your coffee pot only runs for the duration that you need it to.

Adding hundreds to thousands of watts per hour for seven or eight hours until you can get home after work will jack up your electric bill for the month. The impact might not be severe once, but if you make a habit of forgetting to turn off your coffee pot, your electric bills can quickly become the most expensive in the pile.

Although it’s less disastrous than wasting energy, another consequence of running your coffee pot after you leave the house is that you’ll burn the coffee in there.

If you’ve ever had the misfortune of tasting burnt coffee, you know that it’s highly unpalatable. Since you can’t drink it, you’ll have no choice but to dump the coffee, which is yet another waste of money.

It’s rarely as easy as just pouring the burnt coffee down the sink, though. The longer the coffee brews and burns, the thicker it becomes. This is due to the steam that forms as the water burns in the coffee pot, which will coagulate the coffee.

By the time you get home and turn off your coffee pot, the black sludge in there will not come out without a fight. It might take repeated washing and scraping the contents of the pot before the coffee is completely gone.

Maybe you enjoyed every last drop of the coffee you brewed this morning, but you still forgot to turn your coffee machine off. If there’s no coffee in there, since the pot is running, it can scorch your poor coffee pot. Even if there’s some coffee in the pot, if it’s less than a cup, then both the coffee and the pot can burn.

Depending on the severity of the damage, you might be able to remove the burn marks, but a severely charred coffee pot is not safe to use. You’ll have to buy a new one.

The most serious consequence of leaving your coffee pot on for too long is that the appliance can start a fire.

This doesn’t happen every day, but the older your coffee pot is, the higher the risk of a fire starting.

If your coffee pot is on your kitchen counter, then the nearby flammable items such as towels and paper products can feed the fire, causing it to grow and spread through your kitchen and possibly the rest of the house.

Since you’re not home when this happens, you’d have to hope your neighbors who are home smell the smoke or see the flames and call 911. If your neighbors are out of the house as well, then the fire could possibly burn down your entire home, which would be catastrophic.

In some instances, your coffee pot could even explode. This is likelier with a Moka pot. These pots include release valves, but if the pot is on for too long, the release valve might not be able to keep up with all the pressure.

The exploding pot would send flying glass and burning hot water everywhere, which is extremely hazardous. Again, if you’re not home, you wouldn’t be in the line of fire so to speak, but an explosion can lead to or feed a fire whether you’re there or not.

What Should You Do Once You Realize You Left Your Coffee Pot On?

Okay, now you’re freaking out. You’re almost positive you left your coffee pot on when you locked up the house this morning. How should you handle the situation? Here’s what we recommend you do.

As soon as that sinking feeling hits you that your coffee machine is still running, you need to get back home. Don’t leave 30 minutes from now or an hour later. The longer the coffeemaker is on, the worse the damage can be.

Your boss or manager should be understanding of your predicament and let you run home quickly to check everything out. Maybe you have to sacrifice your lunch hour for the day, but that’s okay.

Turn the Coffeemaker Off

You get home and sure enough, your coffee pot is still brewing away. Press the “off” button on the machine immediately so your pot can get a much-needed break. Then leave the coffeemaker to cool down.

Expect that your coffee pot will cool down slowly because it’s been running longer. We’d recommend giving it at least 10 or 15 minutes, even 20 or 30 minutes if you can.

When the cord doesn’t feel hot, unplug the coffeemaker from the wall outlet.

Inspect the Coffee Pot for Damage

With all the parts of your coffee pot sufficiently cooled, it’s time to give them a thorough once-over. If you have to get back to work, you can always save this part for later. For now, the coffee pot is off, and that’s all that matters.

When you do have the time, look at the pot itself. Is it burned? You probably won’t be able to tell until you scrape the coagulated coffee out of the pot. Don’t forget to check the plug too, which can melt from overuse.

If your coffee pot is only lightly damaged with a few burn marks here and there, try cleaning the marks with lemon juice and baking soda. It might take a few attempts, but the burn marks should disappear. At the very least, they’ll be less noticeable.

Should the coffee pot be severely burned and/or the plug melted, then your coffeemaker is no longer safe to use. Dispose of it and treat yourself to another one.

Do Coffee Pots Have Auto-Off Features?

Listen, we all forget from time to time to turn off the coffeemaker. If it was a one-time deal, then don’t worry too much about it. For those who are continually forgetful though, it’s not a bad idea to invest in a coffee pot with an auto-off feature.

Here are a few models to consider.

As a mini coffeemaker, you can brew 25 ounces of coffee at a time. For $35, the price isn’t bad. You’ll like the Brew Later feature, which lets you pre-brew your coffee so even on busy mornings, you can still enjoy a hot cup of coffee before you leave for work.

After two hours, this Mr. Coffee model will shut itself off so you don’t have to.

A full-sized coffeemaker for those who need several cups of coffee to wake up in the morning, the Gevi 4-cup coffeemaker is another Amazon’s Choice product.

The stainless steel finish of the coffeemaker lends it durability, and a hot plate in the glass carafe is a great feature. The cone filter lets you brew authentic, quality coffee right in your home so you can save money and skip the café.

Capable of brewing up to 600 millimeters of caffeinated goodness at once, the drip coffee maker has a swing-out brew basket for quick and simple cleanup. After two hours, the Gevi will power down.

Do you have some free counter space? The Moccamaster 10-cup coffee machine is a bit of a behemoth, but it can brew 40 ounces of coffee at a clip. Its candy apple red color scheme will look fantastic on your counter.

It takes about four minutes to prep the 40 ounces of coffee, so the Moccamaster will soon become integral to your morning routine. Its auto-off feature kicks in after 100 minutes so you don’t have to worry about damaging this great coffeemaker (or the rest of your house).

If you forget to turn off your coffee pot, disastrous consequences can follow. The coffee will coagulate and possibly burn the pot. A fire can break out and sometimes your coffee pot can even explode.

A coffeemaker with an auto-off function can prevent the above scenarios, so we highly recommend one if you’re forgetful!