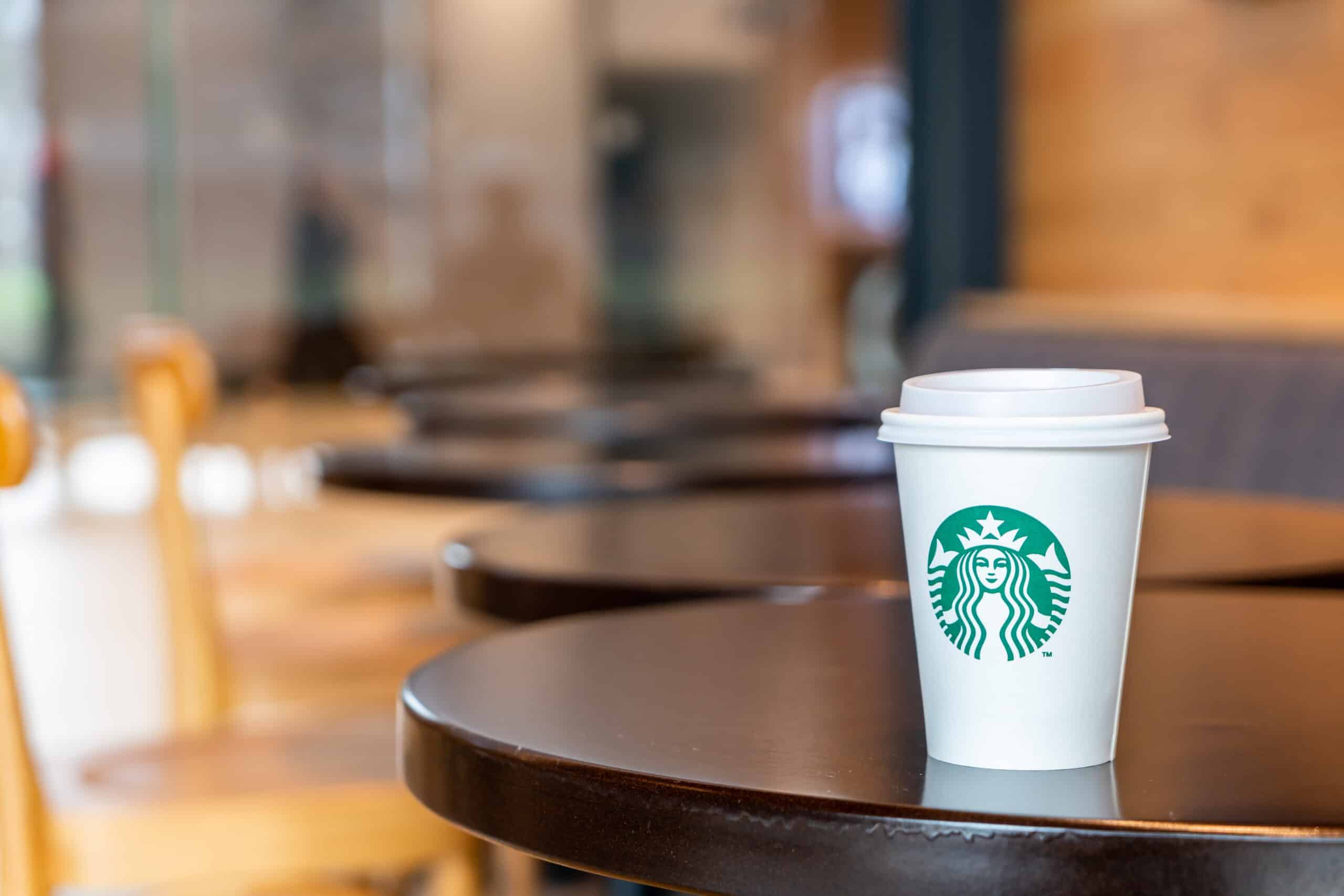 When you need a caffeinated pick-me-up and you need it fast, espresso is the beverage to order. You’re stopping by a Starbucks this morning and you’d like to order their espresso. What kind of espresso machine does Starbucks use, and is it good quality?

Starbucks brews its espresso using its Mastrena machine, a super-automatic produced by Thermoplan AG exclusively for Starbucks. With a computerized menu and efficient grinders, making Starbucks’ Espresso Con Panna is easy in the Mastrena.

What Is the Starbucks Mastrena? Is It High-Quality?

To brew its delectable, caffeinated espresso, Starbucks uses an espresso machine known as the Mastrena.

Manufactured by Thermoplan AG in Switzerland, the Mastrena was designed for Starbucks. The coffee giant has exclusive rights to the Mastrena.

Thermoplan AG is a kitchen appliances manufacturer that was established by Domenic Steiner in 1974. The brand has always made products for the restaurant and foodservice sector.

In 1999, Thermoplan and Starbucks linked up and Thermoplan began producing espresso machines for the brand. The rest is history.

The Mastrena is a super-automatic, bean-to-cup espresso machine. A super-automatic refers to a coffeemaker that will go through all the steps of brewing automatically, from grinding to dosing, tamping, pre-infusing, adjusting the temperature, and controlling the brewing time.

There have existed two Mastrena models over the years. The Mastrena CS2 is the original, and the Mastrena II came after. Thermoplan AG makes both coffee machines.

Before that, Thermoplan had worked on a brewing machine called the Verismo. In the late 2000s when the Mastrena came out, it improved on the Verismo in every way.

The Mastrena has a more streamlined shape, it’s faster, and it boasts more advanced technology.

For instance, the Mastrena II espresso maker can produce espresso shots back to back and the caffeine and quality is consistent.

A strength controller allows the barista to add ingredients with precision and the fast button system ensures the Starbucks team can serve its customers quickly.

The Mastrena can make triple-shot coffee without the barista having to do anything manually, which is awesome. Further, the Mastrena II includes three bean hoppers to store up to 4 kilograms of coffee beans apiece.

As you can see, with the incredible features of the Mastrena II, this espresso machine is considered very high-quality.

A select few Starbucks locations debuted the Mastrena II in 2019. The plan is by 2022 for every Starbucks to have its own Mastrena II espresso maker.

By the way, in case you’re curious, before the Mastrena–so throughout the 1990s–Starbucks used La Marzocco’s Linea espresso machine. This machine had portafilters and far less automation than the Mastrena.

It’s no wonder that Starbucks switched!

What Kind of Beverages Does Starbucks Use the Mastrena to Make?

On the Starbucks menu, you can select from two espresso drinks, their standard espresso, or Espresso Con Panna, which includes whipped cream. The Starbucks team will use the Mastrena for both.

What kind of espresso is used to whip up these tasty espresso beverages? That would be the Signature Dark Espresso Roast, which has been the brand’s standard since 1975.

Back in the mid-1970s, the team at Starbucks was searching for, as they mention on the Starbucks Coffee at Home website, “the perfect melding of beans and roast.”

To find it, the team went on a months-long expedition throughout Asia and Latin America. Their research did eventually yield the perfect coffee beans for making dark roast coffee.

The other espresso roast that Starbucks uses is far newer. Introduced in 2018, the Light Blonde Espresso Roast was created for better balance, especially when drinking your espresso with a splash of milk.

As you’ll recall, the Starbucks Signature Dark Espresso Roast uses only Arabica coffee beans when making the blend. The roasting process brings out flavor notes of caramelized sugar and molasses.

What do real coffee drinkers like you have to say about the Signature Dark Espresso Roast? Coffee lovers have lauded the Starbucks roast’s richness, depth of flavor, and consistency.

Since we’re sure you’re curious about the quality and flavor of the Starbucks Light Blonde Espresso Roast, let’s talk about that a little more as well.

Starbucks uses “select” East African and Latin American coffee beans. The beans are roasted only a little to allow their vibrancy and sweetness to shine. The coffee has been described as versatile, well-rounded, and nicely balanced.

Unlike the Signature Dark Espresso Roast, Starbucks recommends drinking the Light Blonde Espresso Roast over ice or serving it hot with some milk (and perhaps whipped cream too?).

Can You Buy a Mastrena? How Much Does It Cost?

You’ve had Starbucks’ espresso and it’s very good. You’d love to make coffee shop-quality espresso at home every single day. Where can you buy the Mastrena?

Well, that’s the thing. You can’t, really. As you’ll recall from earlier, the Mastrena is a Starbucks exclusive. Thermoplan AG does not produce coffeemakers outside of the restaurant sector, and their products are intended for commercial use only.

Besides, even if you could buy a Mastrena new, you probably wouldn’t want to. The Mastrena II retails for about $18,000.

That’s not a price that’s feasible for the average coffee lover. To Starbucks though, a multi-million-dollar corporation, $18,000 is a drop in the bucket.

If you really have your heart set on owning a Mastrena, you could always look around for one second-hand. If a Starbucks has to close down, someone might put the Mastrena on the market.

Even then, these Swiss espresso machines don’t come cheap. A used Mastrena retails for between $5,000 and $6,000!

Which Coffee Machines Are Comparable to the Mastrena?

For most people, $6,000 is way too much money to spend on an espresso maker, especially a machine that will have already been used. Since you know the Mastrena was used at a Starbucks, it was operating heavily and constantly.

You’re much better off putting your money towards an espresso machine designed for the home coffee brewer. Here are a few of our favorites that are Mastrena quality!

Let’s start with an Amazon’s Choice espresso machine for under $200, the De’Longhi all-in-one. This combination espresso machine and coffee brewer has more of the features you need to brew coffee at home that tastes just like Starbucks.

For instance, the De’Longhi includes a digital touchscreen like what you’d see on a Mastrena. You can schedule your coffee up to 24 hours in advance, selecting from settings like aroma strength and brew strength.

The spill-proof carafe makes handling coffee as easy as a Starbucks barista does it. When brewing cappuccinos and lattes, the frothing wand will come in handy. You can even manually generate steam.

The Italian 15-BAR pressure pump automatically selects the ideal pressure for making espresso. Plus, as the name implies, you can brew coffee at the same time your espresso shots are being prepared.

Another Amazon’s Choice product and a renowned espresso machine akin to the Mastrena is the Mr. Coffee Café Barista.

This sizable espresso and cappuccino maker will froth milk automatically when you choose latte or cappuccino brew settings. You can do that via the single-touch control panel. Select from single-shot or double-shot lattes, cappuccinos, or espressos.

Speaking of espressos, the 15-BAR pump system included with your espresso maker produces a rich, authentic flavor with each shot. This is a semi-automatic machine too just like the Mastrena!

The water reservoir comes out when you’re done brewing using the Café Barista for quick and convenient cleanup.

With its durable brushed stainless steel exterior, the Breville Barista Express is sure to impress.

This top-selling espresso maker is just loaded with features that will make you forget all about the Mastrena.

The espresso extraction process is precision-driven to produce the right temperatures that brew awesome espresso.

The conical burr grinder included with this espresso maker will do on-demand grinding using dose control. An included grind size dial allows you to grind your beans as fine or chunky as you like them, another way that the Barista Express puts you in the driver’s seat.

Low-pressure infusion technology raises the water pressure as you begin brewing to extract the full depth of espresso flavor.

With its professional pump, the Gevi can extract espresso quickly and stably to deliver consistent flavor and richness with every sip. Your espresso will certainly rival that which is sold and served at Starbucks!

A milk steam wand with a froth nozzle (which is removable) makes both foaming up lattes and cleaning up afterward a speedy process.

The Gevi has not one but two thermostats to retain the temperature of the milk foam and the water in the espresso machine. The boiler is stainless steel so it retains its temperature longer. You’ll enjoy more fresher-tasting espresso.

The beautiful Gaggia Brera super-automatic espresso machine will look fantastic in your kitchen with its silver color scheme.

For under $500, the Gaggia Brera features an LED screen on the interface for you to make basic brews or customize your caffeinated beverages. You can select your options using buttons. Mastrena, eat your heart out!

Create steam whenever you want using the rapid steam feature. Gaggia promises that its espresso machine can generate steam temperatures in 10 seconds or fewer.

An included Adapting System allows the Gaggia Brera to learn how you like to make your espresso and then operate that way in the future. For example, the grinder might work faster or slower.

You should appreciate the front-loaded dreg box and water reservoir, as both are quite accessible. You can even pull these components out of the espresso machine from the front.

The brew group comes out as well for cleaning so you can combat accumulating limescale and keep your espresso maker working fantastically.

Further, you get a Pannarello steam wand with an intake hole for siphoning air straight to the milk. This creates creamy, luscious foam.

A bypass doser and hopper gives you the freedom to brew using a ceramic burr, or you grind whole coffee beans.

Starbucks uses an exclusive Mastrena coffee machine to make its Signature Dark Espresso Roast blend for its espresso and Espresso Con Panna beverages on the menu. The Mastrena is produced by a Switzerland company called Thermoplan AG.

The Mastrena costs tens of thousands of dollars to own and is exclusive to Starbucks, so you couldn’t buy it even if you wanted to unless you find one second-hand. Fortunately, to make Starbucks-quality espresso at home, you can shop plenty of more cost-effective coffeemakers instead! 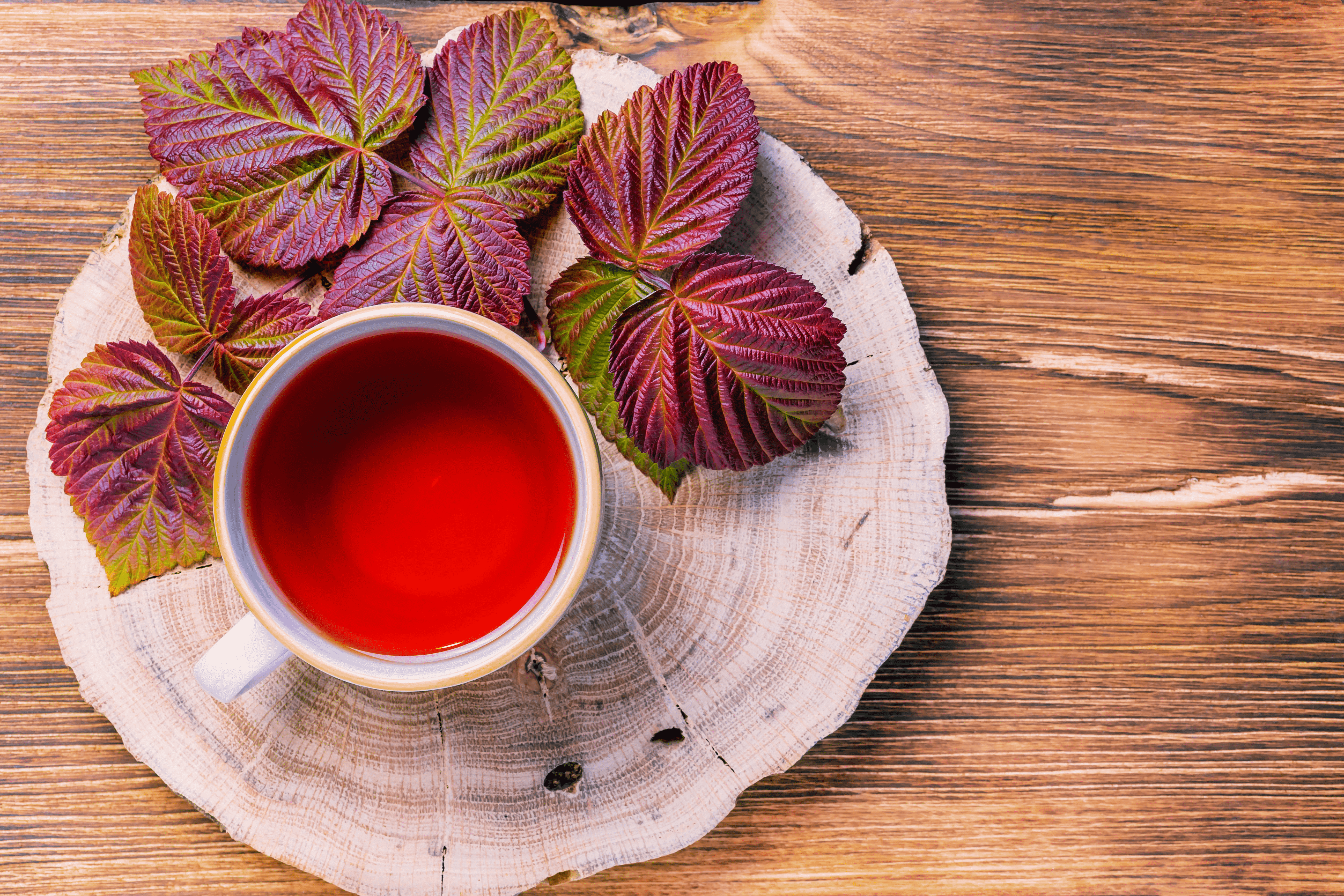 If you own an AeroPress, it’s likely one of your favorite brewing devices you have. Mine is. It’s so simple to use, and the cleanup is a breeze. As such,… 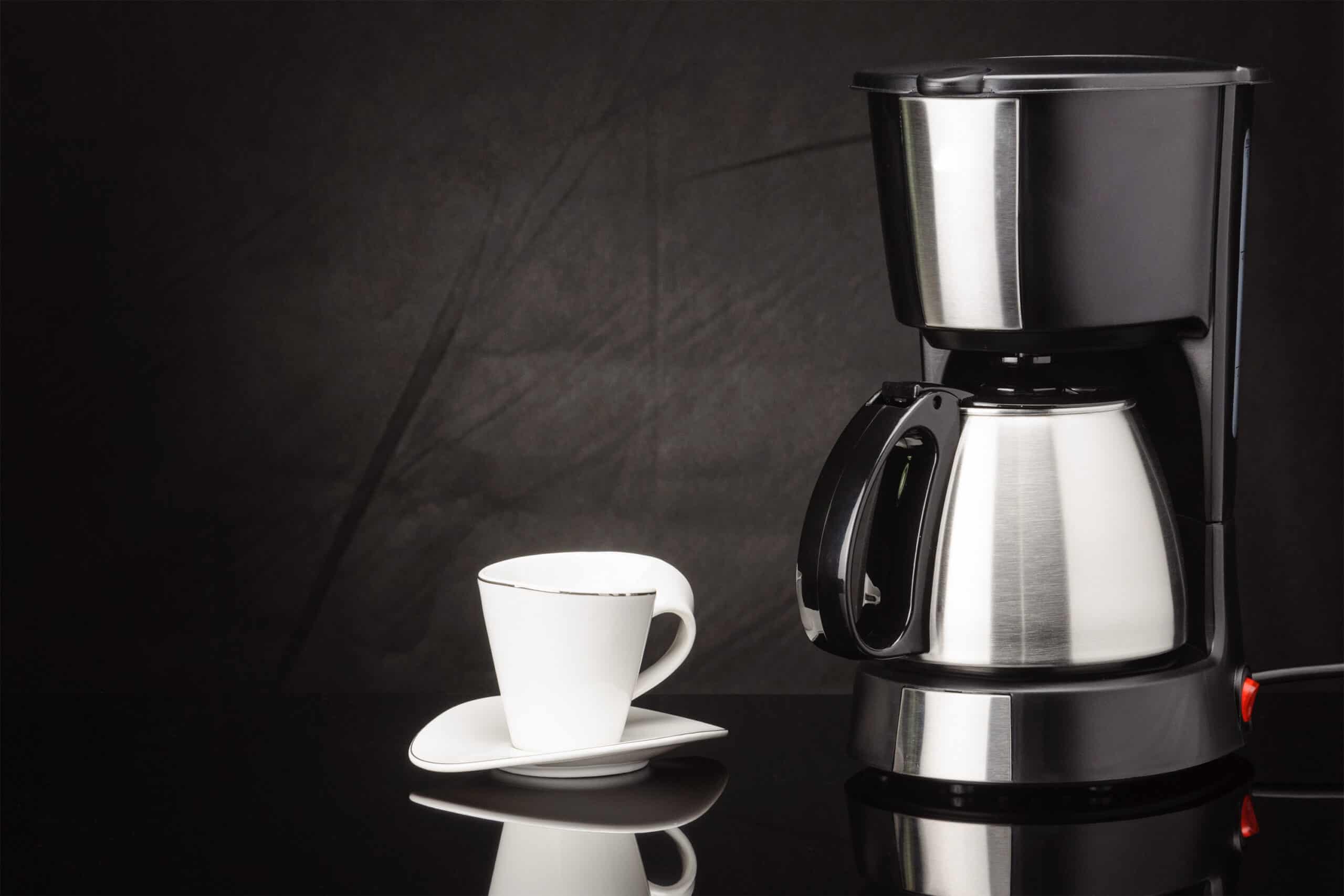 Just as with other items you have and use in your kitchen, your coffee maker also needs regular cleaning. Old coffee residue and limescale build-up occur if regular cleanings are…