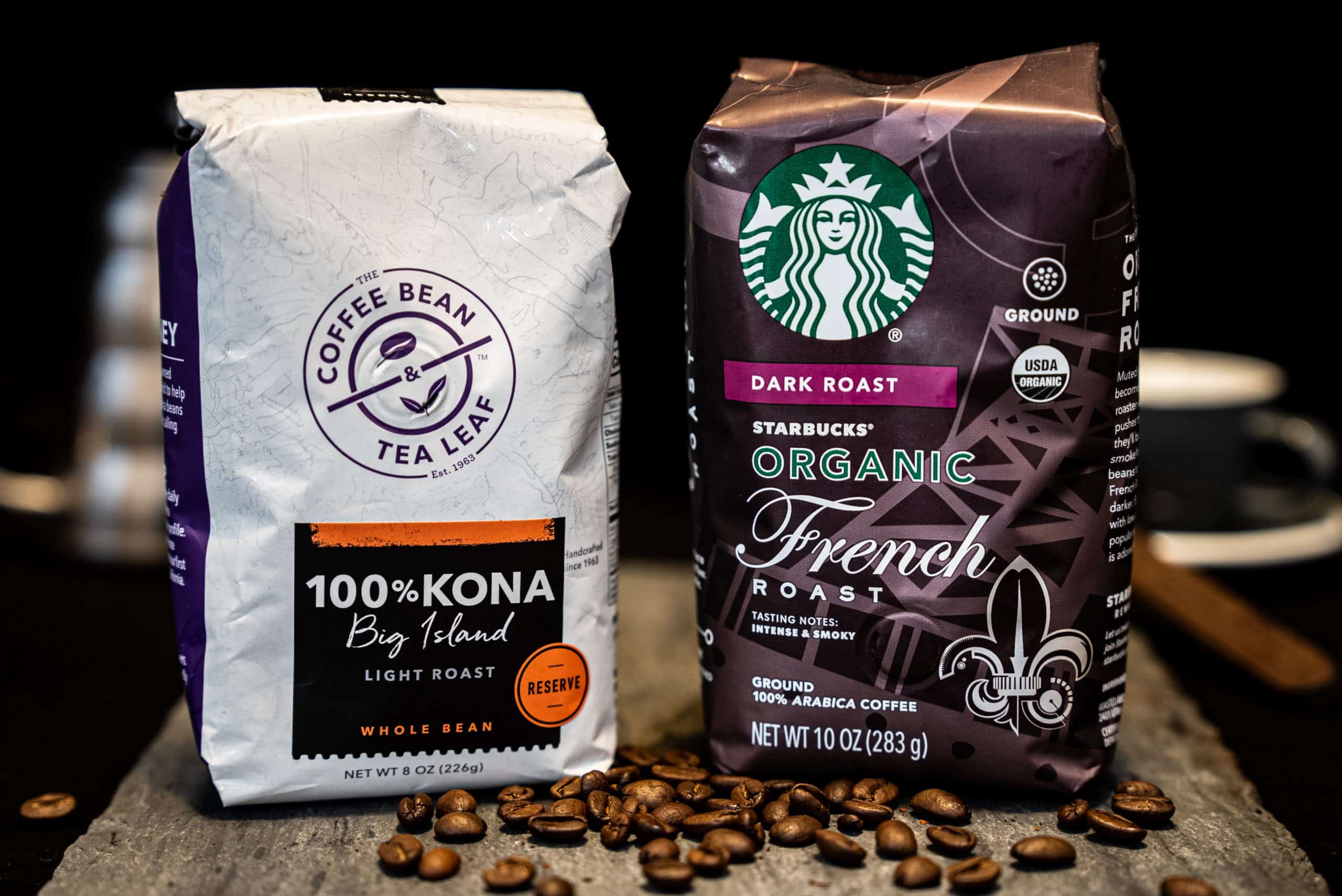 When you have a craving for coffee, you’re likely to stop at one of two café chains, Starbucks or the Coffee Bean & Tea Leaf. Between them, which brand makes the better cup of coffee?

The Coffee Bean & Tea Leaf is known for its Arabica and Robusta coffees as well as their espressos while Starbucks excels at sweeter beverages such as their huge variety of Frappuccinos and their macchiatos. Coffee Bean is slightly more expensive than Starbucks and outnumbered by about 30,000 Starbucks locations.

Which brand’s coffee is the better choice will come down to your personal tastes, of course. In this guide, we’ll strive to help you decide where to buy coffee by discussing the respective menus of both Coffee Bean and Starbucks as well as delving into the pros and cons of both establishments.

Starbucks needs no introduction, but to be fair, we’ll provide one anyway. This Seattle-based coffeehouse was founded in 1971 by Gordon Bowker, Zev Siegl, and Jerry Baldwin, who were all University of San Francisco alumni.

They had just learned of a new means of brewing coffee at the time that was popularized by Peet’s Coffee owner Alfred Peet, so they wanted to start their own café. Originally, Starbucks didn’t sell coffee, but beans for roasting your own coffee at home.

After buying Peet’s Coffee a few years later, Starbucks grew and added espresso to the menu. By 1987, after its founders sold it, Starbucks expanded its location and its menu.

Today, Starbucks has the distinction of being the biggest coffee chain on the planet.

Starbucks has a varied coffee menu for all sorts of tastes, including hot coffees, iced coffees, and Frappuccinos. The chain is also beloved for its non-coffee beverages such as iced and hot teas and cold drinks like the Starbucks Refreshers.

Here is the full list of its hot coffees:

Starbucks’ selection of cold coffees include:

Besides its delicious coffees and other beverages, Starbucks also offers lots of food, everything from hot breakfasts and lunches to its best-selling cake pops.

What Is the Coffee Bean & Tea Leaf?

A man named Herbert Hyman founded the company with his wife Mona. The two had recently traveled to Sweden for their honeymoon and were quite enamored with the quality of the coffee there. They decided to start brewing tastier coffee in the US, and thus Coffee Bean was born.

The first location was in Brentwood, Los Angeles, California. In the many years since its early days, Coffee Bean has stayed close to California, only expanding slightly throughout the west coast.

As the name of this café tells you, Coffee Bean sells more than just coffee, much like Starbucks. However, we’ll focus on their coffees for the sake of this article. Here are the drinks you can select from.

Which Is Better? Starbucks or the Coffee Bean & Tea Leaf?

Only your tastebuds can guide you towards which café chain will have better-tasting coffee, but here are some pros and cons of both Starbucks and Coffee Bean that will also help.

Even if you wanted to drink a caffeinated beverage from Coffee Bean, depending on where you live in the country, you might not be able to. As of 2020, Coffee Bean has 1,000 locations while Starbucks boasts 32,660 stores.

As we touched on in the intro, Coffee Bean is outnumbered by Starbucks by more than 30,000 cafés. Plus, Coffee Bean’s 1,000 locations are spread across nearly 30 countries, which makes them even harder to come by.

You’d have to be a west coast resident, as Coffee Bean’s US locations are centralized to California, Arizona, and Nevada.

If you polled 10 people on the street and asked them if they’ve heard of Starbucks, we’d bet that almost all 10 people would say yes. Yet if you asked the same about the Coffee Bean & Tea Leaf, most people probably wouldn’t be familiar, especially the further you get from the west coast.

Starbucks is one of the best-known brands, not only in the world of coffee but in general. Brand awareness tends to reflect higher sales.

Although Starbucks doesn’t have the words “tea leaf” in its name, the chain still does sell teas as well as refreshers. If you want to stop into a Starbucks but you don’t necessarily want the caffeine jolt, then try these drinks.

Between that and their expansive roster of coffee options, there’s pretty much something for everyone at Starbucks. Don’t forget the full bakery, the hot breakfast options, the prepacked lunches, and the sweet treats like cake pops.

When you were a kid, did you dream of someday being an adult and eating chocolate cake for breakfast every day? Yet you don’t since then it wouldn’t be special anymore.

It’s the same sort of thing with Starbucks. Since it’s so readily available almost anywhere, it loses some of that special feeling. Plus, it doesn’t seem to matter if you visit your local mall Starbucks or the one in the train station, the café is always packed to the gills.

If you have a sweet tooth, Starbucks is for you. Their Frappuccinos contain nearly 70 grams of sugar in a 16-fluid-ounce serving. Even their macchiatos have 38 percent of your recommended daily allotment of sugar.

Sure, you can always try an americano or brewed coffee if you want something less sweet, but a lot of Starbucks menu offerings are quite laden in sugar.

In sales, there exists the scarcity principle. This principle boils down thusly: the more exclusive something is, the higher its demand. That very much can apply to the Coffee Bean. It’s only located on the west coast in the US, so if you live out that way or travel there, you’ll certainly want to try their coffee.

Since Coffee Bean is a littler-known chain, they don’t have to deal with the insanely high consumer demand like at Starbucks. This could allow their baristas to put more time and effort into making each beverage so your coffee tastes delectable.

Although Starbucks is at the top of the pile when it comes to beloved coffee chains, as we said before, the Coffee Bean has been around longer. Founded almost a decade before Starbucks, Coffee Bean has served tasty coffees for almost 60 years. Clearly, they’re doing something right to have survived for this long.

As much as scarcity can boost sales, it can also damage them in some instances. With so few Coffee Bean locations in the US, most people who want their coffee fix can’t get it from this chain. You know where they can go? That’s right, Starbucks.

In pricing comparisons, Coffee Bean coffee was found to be marginally more expensive. Their coffee costs up to $6 while a Starbucks coffee is around $4.65. As we said, it’s a marginal difference, but one that should be brought up nonetheless.

Putting Starbucks against the Coffee Bean & Tea Leaf is a tough competition. If you’d prefer no-frills coffees with flavorful Arabica or Robusta beans, Coffee Bean is the better choice. For sweeter, silky, flavorful coffees, go to Starbucks. There are certainly more of them around!