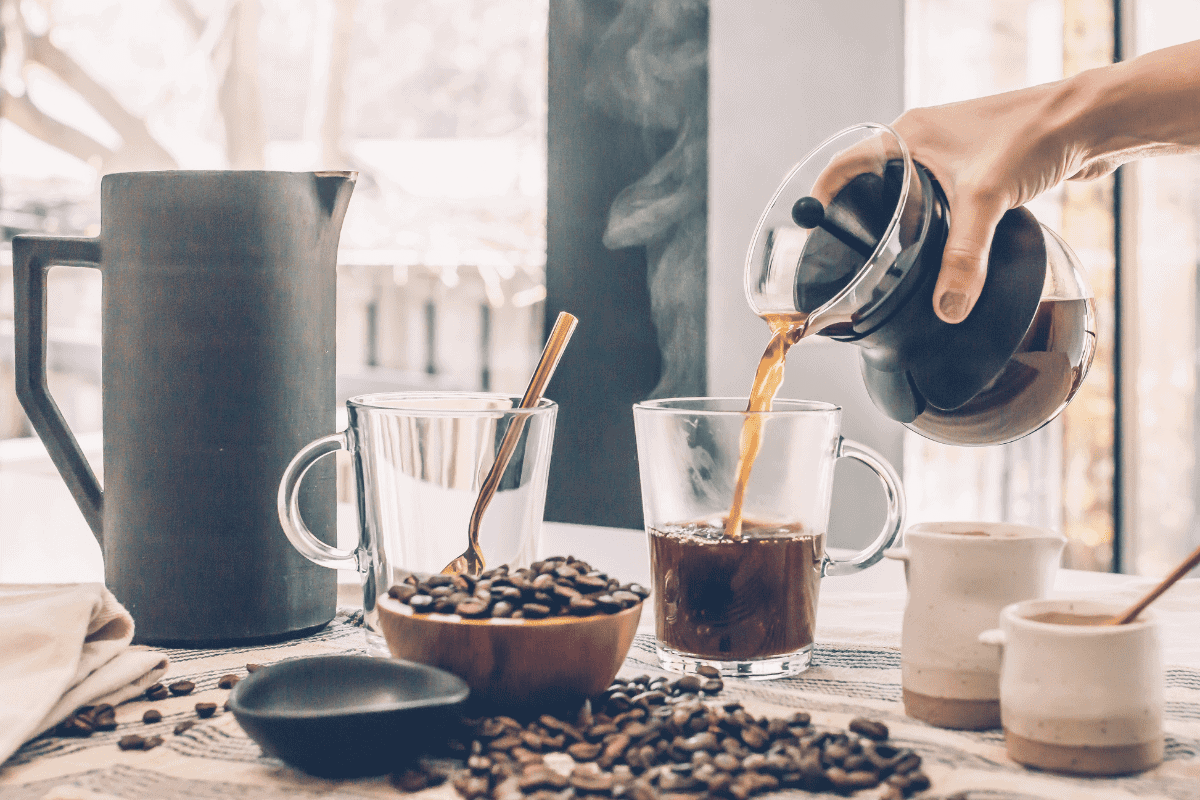 You may be one of those people that a regular strength coffee doesn’t quite cut it. What you crave is a strong cup of coffee with bold flavor. First, let’s discuss what strong coffee actually means.

There’s often some confusion regarding what a strong cup of coffee refers to. The interpretation of “strong coffee” may mean different things to different people. Interpretations range from the taste of the coffee to the amount of caffeine in contains, or a combination of both.

Coffee strength is actually determined by the brewing process. Strong coffee is produced by having a higher coffee to water ratio, not necessarily the roast level of the bean. If you’re referring to strength as to the amount of caffeine, then Robusta beans have the highest levels.

Let’s dig a little deeper into each of the interpretations of “strong coffee” to guide you to make that perfect cup of “strong” coffee.

When strength is referred to as the coffee to water ratio, this is the TRUE definition of strength when describing a cup of coffee. This means what percentage of a cup of coffee is dissolved coffee grounds compared to the amount of water.

This is similar when measuring the strength of alcohol. For example, if you look at a bottle of whiskey, it will tell you what percentage of the bottle is ethanol. Basically, how strong is it. If you have a glass of wine, it may be 10% or 12% alcohol. The same is true when measuring the strength of coffee. You are describing how much dissolved coffee grounds are actually in your cup of coffee.

Typically speaking, when using filter coffee, the strength will be anywhere between 1 to 1.5%. The higher the percentage, the stronger your cup of coffee is.

To learn more on what is the best coffee to water ratio, click here!

Typically speaking, the amount of caffeine in a cup of coffee will correlate to how much was in the beans to start. Along with how well it was brewed.

Now that we’ve determined that Robusta contains the most caffeine per bean, below are some of the highest caffeine content coffee brands on the market today.

I have to warn you about these coffees, though. These coffees are incredibly high in their caffeine content and are only for individuals with a high tolerance for caffeine and can handle more elevated amounts of caffeine. Do not consume them like you would regular coffee.

Besides choosing coffee beans with a higher caffeine content, there are also specific brewing methods that will yield higher levels of caffeine. For instance, any method having longer steep times, such as a French press or Aeropress, will better produce higher amounts of caffeine. The longer it takes for the water to go through the ground coffee, the more caffeine will be extracted.

Since we are on the topic of brewing methods, below is our pick for the highest-ranking French Press and AeroPress. Both are great products that I use in my kitchen.

The third way people use the word “strength” with a cup of coffee is when they are referring to the roast level of the coffee bean.

Often at grocery stores, you’ll see a “strength rating” on the side of a bag of coffee beans. This describes the intrinsic quality of the coffee. So instead of relaying the actual strength of the coffee, it’s identifying the roast level of the bean.

For example, a strength five would be a very dark roast, and a strength two would be considered a lighter roast. These strength ratings on grocery store coffees describe the bitterness or harshness of the flavor of the coffee. It has nothing to do with the actual strength of the coffee.

If you wanted a higher caffeine content, you would like a lighter roast due to it being denser. As coffee beans are roasted, they lose up to 90% of their water content, leaving more minerals and nutrients, including caffeine. For more detailed information on coffee roasts check out our other article Which Coffee Roast is the Strongest?

On the other hand, if you are referring to boldness when it comes to strength, then a dark roast coffee is what you are looking for. Although darker roasts are less acidic and contain the least caffeine, they are the boldest in their flavor. Often, these darker roasts can have a bitter taste to them as well.

As you can see, answering the question “What coffee bean makes the strongest coffee?” is not as easy as you may have hoped. Depending on what your definition of “strength” is will change the answer you are seeking.

But if you didn’t know before what the TRUE meaning of strength is when referring to coffee, hopefully now you have a clearer understanding.