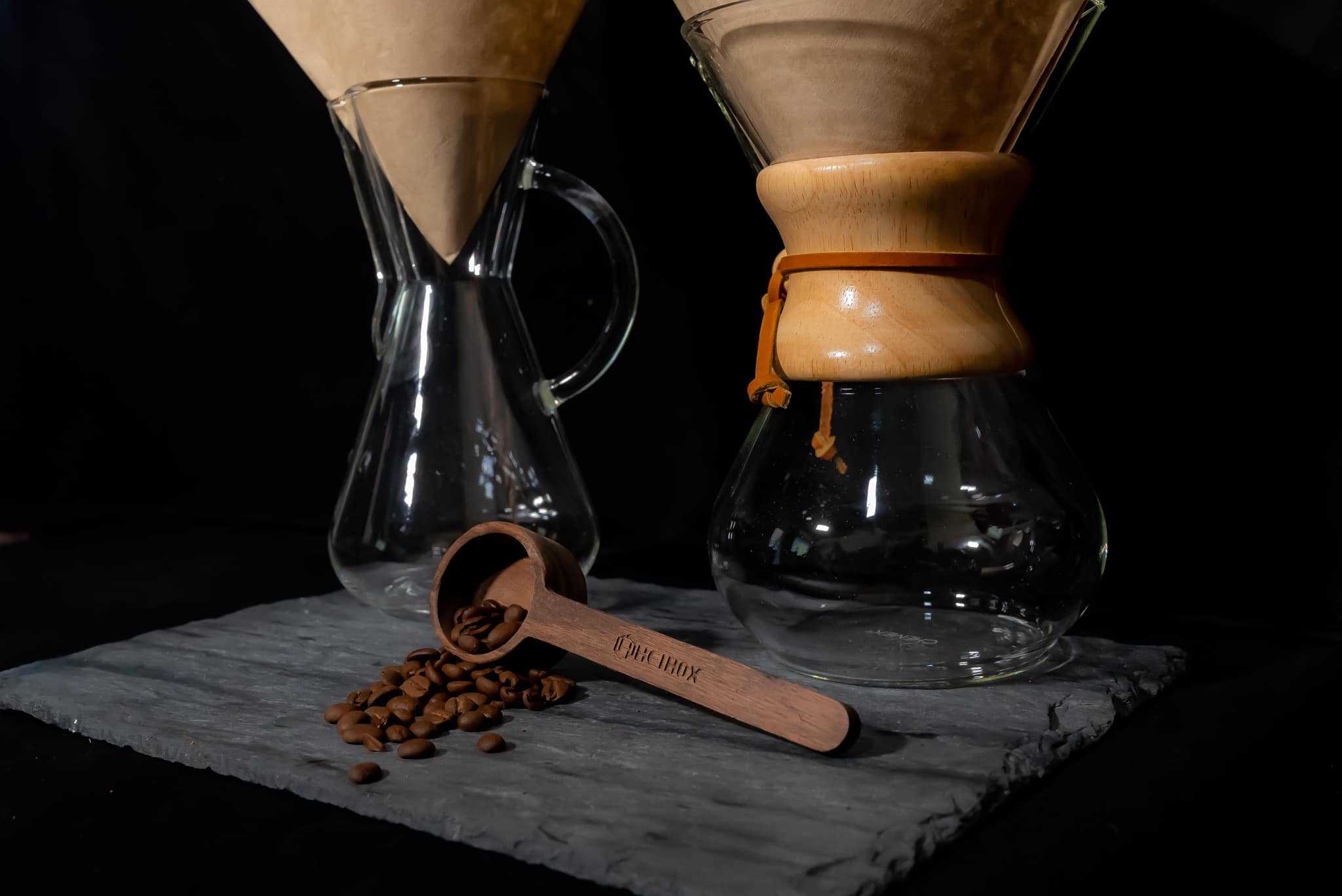 You’ve always loved the look of a Chemex coffeemaker, but you hadn’t realized they were available in so many sizes. You’re having a hard time deciding between a 3-cup or a 6-cup model. Which one is the right choice?

Whether you want a 3-cup or a 6-cup Chemex depends on how much coffee you drink. The 3-cup version can hold approximately 1 pint or 473 milliliters while the 6-cup version brews 30 ounces or 887 milliliters of coffee.

You might decide to buy a Chemex with even greater capacity still, such as an 8-cup or a 10-cup coffeemaker. In this article, we’ll help you decide which Chemex model is right for you whether you’re a one-cup coffee drinker or someone who fuels up on coffee well into the afternoon.

If this is going to be your first Chemex coffeemaker, it doesn’t hurt to get acquainted with the product. After all, Chemex is not your average coffee brewer!

Based in Chicopee, Massachusetts, Chemex is a glass pour-over coffeemaker brand. A man named Peter Schlumbohm came up with the concept of Chemex in 1941, and it’s endured ever since then.

The main flask of the Chemex is glass and shaped like an hourglass. Within the flask are bonded paper filters. This paper is heavier than other drip coffeemaker filters so it can collect the coffee oils. The result is supposed to be a cleaner cup of coffee, which is an advantage that Chemex has over other coffeemakers.

What does it mean to have a cleaner cup of coffee? Your beverage will have less bitter flavor as well as less caffeine. A compound in coffee known as cafestol can be extracted as well, although not in full. It’s believed that cafestol can increase your cholesterol, so you don’t want it in your coffee.

Getting back to how the Chemex works, the coffee brewer also comes with a neck collar that’s heatproof. This might be made of wood depending on the Chemex model or it could be glass. The all-glass Chemex is dishwasher-safe whereas the wooden one is not.

Chemex coffeemakers are available as part of three different series: the Classic, the Glass Handle Series, and the Handblown Series. Let’s talk more about each series now.

The Classic Series features wooden collars and a leather tie that encircles the collar to keep it secure. When you remove the tie, the turned and split collar comes right off so you can wash it by hand (remember, the wooden collar is not dishwasher-friendly).

The Chemex’s borosilicate glass is designed to withstand chemical residues and limit odor absorption. You can cover or even refrigerate this pour-over coffeemaker to enjoy your coffee later, although you’d have to reheat the beverage.

The third series of Chemex coffeemakers is the Handblown Series. Each of these coffee brewers is blown by hand, as the name suggests. The glass is still borosilicate, but it’s Croatian in origin.

Since hand-blowing a coffeemaker is no easy feat, these coffee brewers are produced in smaller numbers than those in the other series. The Handblown Series Chemex coffeemakers also feature a polished wooden collar.

Which Chemex Sizes Are Available?

Although we’re only talking about two of them today, Chemex coffeemakers are available in a variety of sizes: 3 cups, 6 cups, 8 cups, or 10 cups. Here is the storage capacity for each.

Chemex 3-Cup vs. 6-Cup: Which Is the Right Choice?

Now that you know a bit more about the Chemex brand, you’re probably more eager than ever to get your hands on one of their coffeemakers. We know you’re still trying to decide between a 3-cup or a 6-cup Chemex coffee brewer, so here are some factors that will make your choice easier.

Are you more into handblown glass, or perhaps you want an all-glass Chemex coffeemaker? Depending on how you answer that question, you don’t necessarily get to choose between a 3-cup or a 6-cup coffee brewer.

What do we mean by that? Not each of the Chemex series has coffeemakers in the same sizes. For example, in the Classic Series and the Glass Handle Series, you can choose between 3-cup, 6-cup, 8-cup, or 10-cup coffeemakers. Yet in the Handblown Series, your options are only 3 cups, 5 cups, 8 cups, or 13 cups.

Another factor to think about is what the price of your Chemex coffeemaker will be.

These aren’t overly expensive coffee brewers. The average price for the 3-cup model is $43 unless you want a limited-edition handblown coffeemaker. Then it costs $109 for the 3-cup version. Yes, that’s quite a steep price increase.

The 6-cup Chemex coffee brewers are $47 on average. Remember, there’s no 6-cup Handblown Series Chemex, but the closest equivalent is the 5-cup model. That one costs $116.

Assuming you’re not interested in a handblown Chemex, the price difference between 3 cups and 6 cups isn’t huge.

However, that’s not the case with storage capacity. Although Chemex advertises each coffee brewer by the number of cups of coffee it can produce, you’re not getting that exact number of cups from the coffeemaker at once.

It only takes doing some math to prove as much.

It’s the same story with the 6-cup Chemex, by the way. That model can produce 887 milliliters of coffee at a time. By converting that to fluid ounces, you get 29.99 fluid ounces. We’ll round that up to 30 fluid ounces.

Dividing 30 by 8 gives us 3.75. Even if we’re being generous and round up that number, you’re still 2 cups short of the advertised 6 cups.

Should You Choose the 8-Cup or 10-Cup Chemex?

If you work in an office where you’re in charge of making coffee, then 4 cups at a time probably won’t cut it. You might then consider some of the higher-capacity Chemex coffeemakers such as the 8-cup or 10-cup editions.

We do want to mention once again that these coffee brewers will not produce the exact amount of coffee as advertised. Let’s do some math again so your expectations are reasonable.

What about the 10-cup Chemex coffeemaker? It’s got the greatest capacity yet at 1,489 milliliters, which is 50.35 fluid ounces. Let’s round that down to 50 fluid ounces. Dividing that by 8–the standard number of fluid ounces per cup of coffee–gives us 6.25.

So you’d get 6 and a half cups of coffee from the 10-cup Chemex.

How to Brew Coffee with Chemex

Whether you’ve decided that you need a 3-cup Chemex, a 6-cup version, or even an 8 or 10-cup model, how you brew coffee in the Chemex doesn’t change. Without further ado, here are the brewing steps to follow.

First, bend the paper filter on the side with a printed 3. Next, rinse the filter using hot water so you don’t get a paper flavor in your coffee. Then put the folded filter into the flask neck.

Pour hot water that’s at least 195 degrees Fahrenheit (up to 205 degrees) into the Chemex and then add your ground coffee. When your coffee brews, a spout within the Chemex allows you to pour hot coffee straight into your favorite mug!

Chemex is a glass coffeemaker that brews coffee in the pour-over style. The 3-cup and 6-cup models are popular, but neither produces as much coffee as advertised. You’ll get about 4 cups of coffee in a 6-cup Chemex, which is just as much coffee as a healthy person should ingest per day anyway!