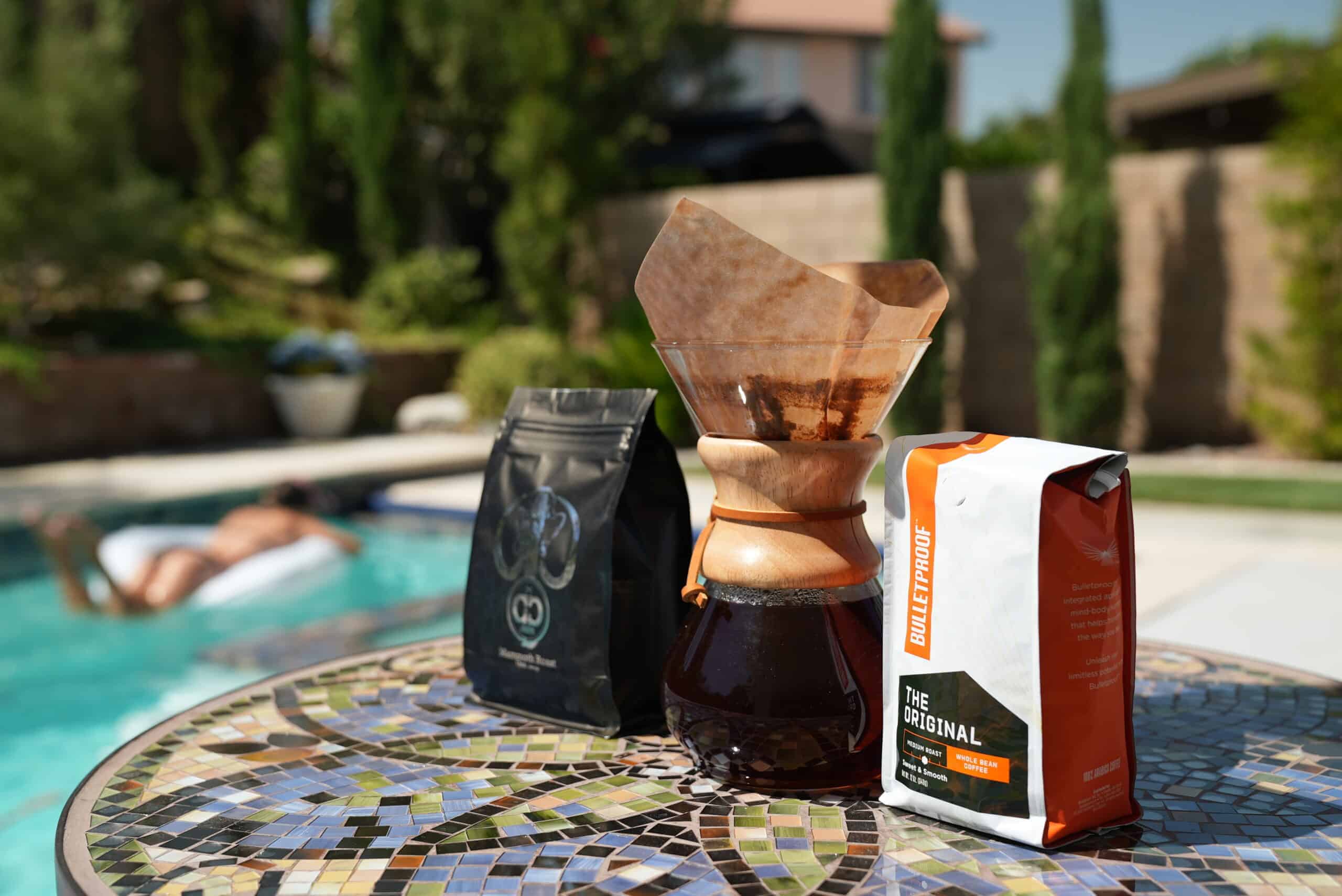 You’re always on the lookout for coffee brands you’ve yet to explore, which is why you were thrilled when your friends recommended you two brands. One is Caveman Coffee Co. and the other is Bulletproof Coffee. You plan on trying both, but between the two, which is the better choice?

Caveman Coffee Co. is the favorite between it and Bulletproof Coffee for the slightly lower price and the better flavor. Since the two brands offer dark and light roasts as well as cold-brewed canned coffee and more, both are worth trying!

Your tastebuds will dictate whether Caveman Coffee Co. or Bulletproof Coffee is more to your liking, but in this article, we want to cover subjective topics related to both brands. Ahead, we’ll talk about the respective coffee company histories, their products, pricing, and more. This will help you choose the best coffee for you!

What Is Caveman Coffee?

Let’s start with Caveman Coffee Co., which was founded in 2013 by three athletes, Lacie Mackey, Keith Jardine, and Tait Fletcher. Mackey is a CrossFit specialist and works as a pro stunt trainer for Hollywood films and television shows.

Jardine is a UFC fighter and a renowned World Champion. Nicknamed Keith “the Mean” Jardine, he also works as an actor and a stuntman. He’s appeared in Breaking Bad, Maze Runner, John Wick, and Inherent Vice.

Fletcher is also an actor, having won SAG awards for his work in The Equalizer, John Wick, Jurassic World, Breaking Bad, and others. As a BJJ Black Belt and an MMA fighter, Fletcher also runs his own jiu-jitsu and CrossFit gym in New Mexico.

The three superstars worked with a specialty coffee roaster that produces authentic Colombian coffee beans to make the delectable coffee that Caveman is known for.

According to its website, Caveman coffee beans pass Rainforest Alliance and UTZ protocols and certifications for growing coffee beans naturally and sustainably. All coffee beans undergo hand-picking upon ripening and then are wet-processed to dry them out.

Caveman Coffee Co. has a rich selection of teas and coffees. All coffee is infused with medium-chain triglyceride or MCT oil, which is touted for its weight loss benefits. Whole coffee beans are available as well.

Here are the beverages you can choose from:

What Is Bulletproof Coffee?

That brings us to Bulletproof Coffee. Their company was created in 2011 in Washington by a man named Dave Asprey. Like the founders of Caveman Coffee Co., Asprey is into more than just coffee. He’s also an author of books such as The Bulletproof Diet, which inspired the name of his coffee company.

All Bulletproof coffee also includes grass-fed butter and MCT oil. Asprey came up with the concept for Bulletproof coffee upon returning from Tibet. While there, he had drunk many yak butter teas, a type of tea that is indeed made with real butter.

Asprey wanted to manufacture his own butter coffee, and hence, Bulletproof Coffee was born.

According to Asprey, you can lose weight by drinking his coffee (since it’s supposed to be keto-friendly), and the beverage might be able to improve your cognition and even your IQ. He’s said that his own IQ went up by over 20 points, but that it took “health hacks” as well as Bulletproof Coffee to achieve this.

Here are the products available from Bulletproof Coffee:

Caveman vs. Bulletproof Coffee – Which Should You Drink?

Now that you’ve been introduced to the backstories and product offerings for both Caveman Coffee Co. and Bulletproof Coffee, let’s jump into the pros and cons for the two brands. This will make it easier to decide which coffee to try first!

Beginning with Caveman Coffee Co., you can’t deny that its three founders are very awesome people. They’re CrossFit pros, they work as stunt doubles, they’re actors, and they find time to fight in MMA as well. That’s an undeniably well-rounded resume!

Do the respective professional backgrounds of its founders make Caveman coffee better? No, of course not, but in today’s world, it’s all about influence and acclaim, and Caveman Coffee Co. has both.

That could inspire some people who might have otherwise passed on this brand to go back and give it a second look, buying and enjoying Caveman coffee.

The variety of caffeinated beverages produced by Caveman is unique enough that you shouldn’t get bored.

If you’d rather brew your own coffee at home, you can choose from such options as the Mammoth roast, which is supposed to have flavor notes of chocolate, nuts, and lemon. You could try the Sabertooth dark roast as well, which tastes like a mix of toasted hazelnuts, vanilla pipe tobacco, and campfire marshmallows, says Caveman.

No time to brew your coffee this morning? Then just reach for a cold-brew latte from your fridge so you can drink your coffee on the go. Since these coffees come in 12 packs, you’ll have more than enough to get you through the workweek.

You can even enjoy tea from Caveman Coffee Co. Their Sparkling Hibiscus Cold-Brew Tea has no sugar or caffeine and contains only six calories per can.

Given the backgrounds of its founders, it’s no surprise that Caveman Coffee Co. produces coffee that’s on the healthier side. Theirs contain MCT oils that are smooth and don’t interrupt the texture of the coffee.

We mentioned earlier that MCT oil can encourage weight loss. Outside of that, there’s also evidence that MCTs can control your blood sugar, increase your energy, and help you burn fat for energy.

Studies such as a 2016 publication of the journal Nutrients have also posited that MCT oils could lower heart disease risk factors such as body mass index, inflammation, high blood pressure, and high cholesterol.

Not only can you enjoy coffee for energy if that coffee comes from Caveman, but for those other potential health benefits as well!

Butter might seem like a strange ingredient to put in coffee, but it’s not just for the flavor.

Including butter in your coffee introduces more lipids that can reduce the rate of caffeine absorption. In other words, you won’t feel that huge spike of energy that you get from caffeine, nor will there be a sudden crash that leaves you sluggish and craving more coffee.

If you’d rather experiment with butter in coffee on your own terms, Caveman sells its own organic cacao butter that tastes great.

For as many great coffee products that Caveman sells, if you compare their product roster to that of Bulletproof, Caveman’s selection is smaller. Granted, some of Bulletproof’s products are bundles, but you can still buy more goods from them.

If you were hoping that comparing Caveman and Bulletproof coffee would reveal one clear winner in the price department, that’s not the case. These two coffee brands sell their products for pretty much the same price if you do a bag-by-bag comparison.

The average price for a bag of coffee beans from both brands is $15, which is reasonable.

When Dave Asprey founded Bulletproof Coffee, he did so as a complement to his Bulletproof Diet. By drinking the coffee and following the Bulletproof Diet, you’re engaging in healthy lifestyle choices that could help you lose weight.

Remember, the Bulletproof Diet is a form of the keto diet. The purpose of the keto diet is to restrict carbs to such a degree that your body burns through all your glycogen. This is the converted glucose that comes from food, but especially carbs and sugar.

By depriving your body of further carbs or adding very few carbs to your system, your body will have no more glycogen to burn for energy. It will begin burning fat instead, which can help you look trimmer and more toned.

We talked before about the variety of products from Bulletproof. They have far more bagged coffee grounds than Caveman does, and in light, medium, and dark roasts to boot.

If you own a Keurig or another type of coffee machine that uses pods, you can buy Bulletproof coffee in pods as well. That’s not something that Caveman Coffee Co. offers.

For the busy person on the go who’s craving coffee, Bulletproof also has canned cold-brew lattes. You can buy a 12-pack in three flavors: original, vanilla, and dark chocolate. You’ll have about two weeks of coffee with enough flavor options to keep each day interesting!

Unlike Caveman’s coffee, Bulletproof coffee has butter in each brew. This will augment the taste of your coffee, making its flavor special.

Wait, didn’t we just say that the butter in Bulletproof’s coffee is a good thing? It can be, but then again, it depends on your tastes. Most coffee drinkers who have sampled both Caveman and Bulletproof coffees have chosen Caveman because of its flavor.

You either will love butter in your coffee or hate it. With Caveman’s coffee, you can add the butter in separately, but with Bulletproof, there’s no way to get it out of the brew. No matter which of their coffees you buy, it will have butter in it.

If you can’t stomach the taste of butter coffee–even if it will prevent caffeine crashes–then you won’t be able to drink Bulletproof coffee.

Bulletproof’s coffee kits, which include MCT oil, ghee (a type of clarified butter), and coffee are between $56 and $70. A three-pack of their Keurig pods, which contains 24 pods altogether, is $81, which is quite steep!

Caveman Coffee Co. and Bulletproof Coffee both produce coffee infused with MCT oil for better cognition and weight loss. However, Bulletproof also adds butter right into their coffee while Caveman sells butter you can add separately should you want to.

We’d recommend trying both Caveman and Bulletproof (if you don’t mind the thought of butter coffee) so you can choose your favorite!