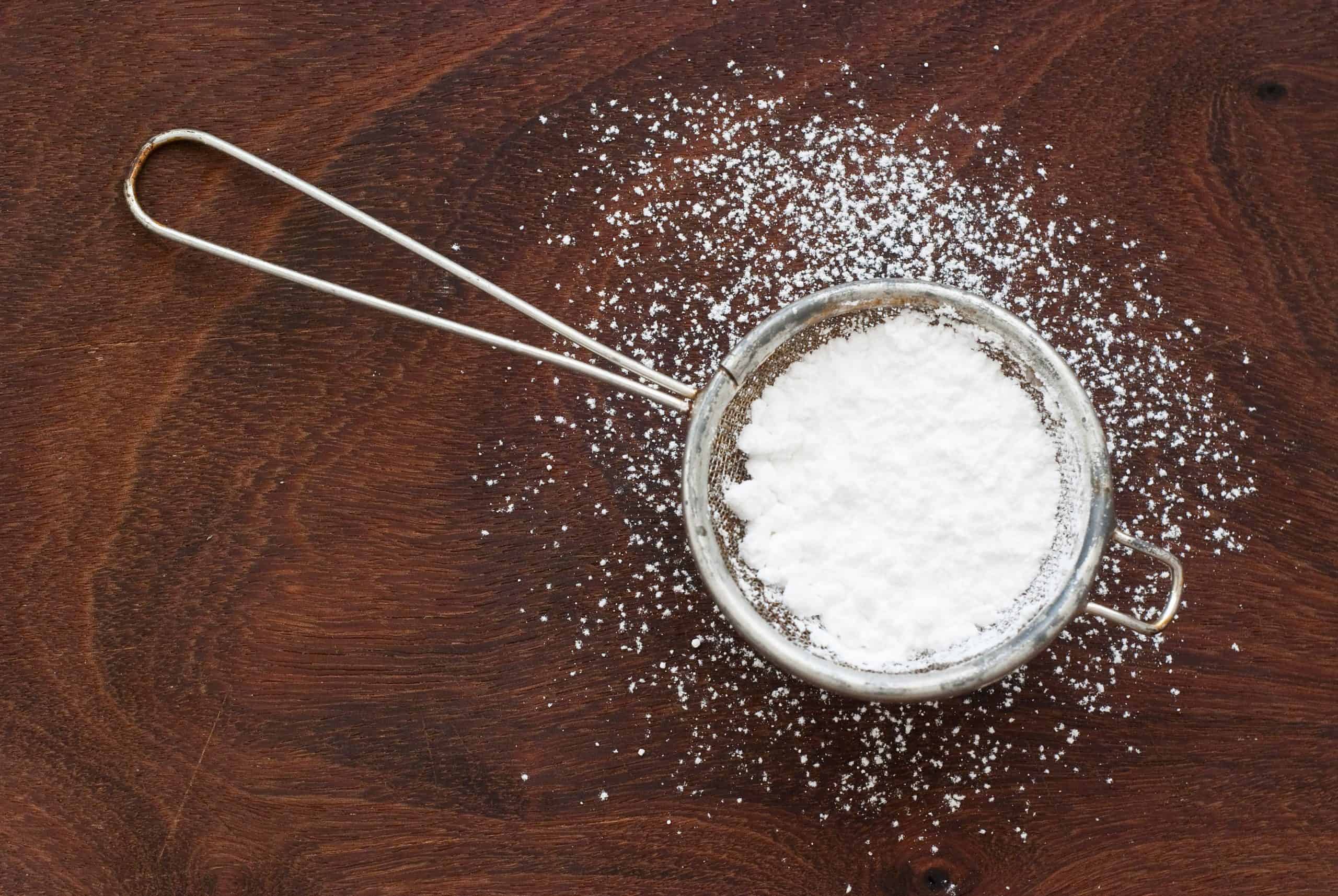 You can’t drink coffee unless with cream and sugar, but you’re out of the latter ingredient. You searched your pantries high and low and all you have around is powdered sugar. Is sugar really sugar or is powdered sugar going to change the taste of your coffee?

Powdered sugar won’t affect the coffee flavor much compared to granulated sugar, but you don’t want to use the powdered variety for a different reason. It contains cornstarch which will remain in your cup no matter how much you stir the powdered sugar since cornstarch is not water-soluble.

In this article, we’ll first examine powdered sugar and explain how it’s different than standard granulated sugar. Then we’ll talk further about why powdered sugar isn’t the best choice to sweeten your coffee and what you can use instead.

As you’re beginning to realize, all sugar is not the same. To show you what we mean, let’s discuss where granulated sugar comes from, which is the sweet stuff you normally add to your coffee. Then we’ll compare it to powdered sugar.

Referred to as table sugar, white sugar, and regular sugar, granulated sugar is what most people put in their grocery carts when they’re shopping for sugar.

Raw sugar starts off with high quantities of molasses, which tints the sugar brown. When it’s refined, the molasses and brown hue both disappear completely. This sometimes involves bleaching the sugar until it’s white.

Granulated sugar doesn’t stick to itself, which is why it’s a popular form of sugar for sweetening beverages and for baking. When used in coffee, you just sprinkle in as much granulated sugar as you want, stir it with your coffee spoon, and the sugar should dissolve.

Powdered sugar has some nicknames too, including confection’s sugar and icing sugar. This type of sugar starts off granulated, then it’s grounded. Since the ground sugar can stick, food manufacturers will add cornstarch. Powdered sugar will be snowy white as well, attesting to its humble beginnings as granulated sugar.

Like that form of sugar, powdered sugar has a role in baking. You wouldn’t use it to make cakes and cookies though. Rather, it comes in handy for producing glazes and frostings. The fine, dust-like sugar that coats some donuts is powdered, not granulated sugar.

Why You Shouldn’t Use Powdered Sugar in Coffee

Since powdered sugar is granulated sugar that’s pulverized, can’t you use one type of sugar in exchange for another in your coffee?

No, and for two important reasons.

The first is that the two types of sugar do not weigh the same. Since granulated sugar particles are far larger, it’s denser and heavier. Two tablespoons of granulated sugar would convert to only 1/4th a cup of powdered sugar.

The second and more important reason to skip powdered sugar in coffee is the inclusion of cornstarch.

Cornstarch is often used in savory recipes to bind ingredients. It’s not water-soluble, meaning that even in hot water, it’s not going to dissolve. The last thing you want is powdery stuff clumping at the bottom of your coffee cup. It’s going to leave you with quite an unpleasant surprise when you take that last sip!

Can You Substitute Granulated Sugar with Other Types of Sugar in Coffee?

You already know that powdered sugar isn’t a good substitute for granulated sugar in coffee, but what about the other varieties of sugar out there? Well, your options are brown sugar, sanding sugar, and coarse sugar.

Sanding sugar is for decorative purposes only, so you can’t use that. Coarse sugar is like granulated sugar but with larger sugar crystals. Due to their size, these crystals are relatively heat-resistant.

While you could melt coarse sugar crystals eventually, it would take longer. By then, your coffee might go cold. For that reason, we’d say to forego coarse sugar as well.

Brown sugar though is perfectly applicable. Do be aware that the coffee flavor will change, but some coffee lovers prefer it since the taste is complex and richer. This is because brown sugar has more molasses than white sugar.

7 Low-Sugar Ways to Sweeten Your Coffee

It doesn’t really matter if it’s white sugar, brown sugar, or powdered sugar, it’s not healthy for you. Consuming large quantities of sugar has been tied to weight gain and obesity, high blood pressure, diabetes, and heart conditions.

You’re better off skipping even brown sugar and trying some low-sugar sweeteners in your coffee instead. Here’s a list to get you started.

We’ve talked about molasses a lot already in this article, as it’s a raw sugar byproduct. Originating from sugarcane plants, molasses starts as cane syrup. Then it’s boiled several times until it’s sticky and thick.

Blackstrap molasses especially has very little sugar. Even better is that it’s rich in selenium, vitamin B6, magnesium, calcium, and iron. Adding blackstrap molasses to your morning coffee can get your day off to a healthy start, especially when consumed as part of a balanced breakfast.

You only need a tablespoon of molasses for your coffee. If you thought drinking coffee sweetened with brown sugar had a great depth of flavor, wait until you try coffee with blackstrap molasses. You might not prefer your coffee any other way going forward!

Cinnamon is a spice that pairs especially well with coffee. Like blackstrap molasses, cinnamon is healthy for you in a multitude of ways. For those with diabetes, small quantities of the spice could reduce triglycerides, cholesterol, and blood glucose.

You only need a dash of cinnamon in your coffee to make a big difference in its flavor profile. Be sure to stir the cinnamon powder well so it dissolves. You can use a coffee spoon for that or even a cinnamon stick!

A sweetener with the same consistency as molasses, honey might seem better suited to tea than coffee, but it works well in either beverage. You will notice a slight change in the flavor of your coffee when using honey compared to granulated sugar.

It’s for that reason that we recommend adding just a bit of this sweet bee byproduct, then increasing the amount as your tastes call for.

If you missed our post about putting chocolate syrup in coffee, you need to go back and give it a read. Coffee and chocolate are a perfect pair, as the taste of one complements the flavors of the other.

Chocolate syrup is quite high in sugar though while unsweetened cocoa powder is not. A scoop of the stuff–which is roughly a tablespoon, maybe a tablespoon and a half–stirred thoroughly into your coffee will infuse it with delicious chocolate flavor but without all the sugar (and calories!).

If you’re not familiar with coconut sugar, allow us to introduce you. This type of palm sugar comes from a coconut palm’s flower bud stem, which releases sap. That sap gets mixed with water, then it’s boiled and dried until it crystalizes.

The crystals are broken down into small sugar particles or granules. A plant-based alternative to white sugar (which is sweetened using an animal byproduct called bone char and is thus not technically vegan), coconut sugar might be able to control blood sugar, especially in diabetics.

Although it’s low in sugar and calories, it’s not nutritionally beneficial, so use coconut sugar sparingly.

The sugar alternative that took the world by storm, stevia comes from the Stevia rebaudiana, a plant that’s harvested for the compounds in its leaves. Those compounds, which include steviol glycosides, are believed to be up to 150 times sweeter than granulated sugar.

You should certainly not sub out the regular amount of sugar you take in your coffee with stevia, as it could be way too sweet!

The last low-sugar coffee sweetener we recommend is agave, which is nectar derived from a plant species of the same name. The nectar often replaces honey since it has the same consistency.

The difference in calories between stevia and agave is paltry, so if you like one over the other, neither is necessarily healthier.

Powdered sugar might seem like a good substitute for granulated sugar in a snap, but it isn’t. The cornstarch in the powdered sugar won’t dissolve in your coffee. You’re better off using brown sugar. If you want lower-sugar alternatives, try agave, stevia, cinnamon, or blackstrap molasses!