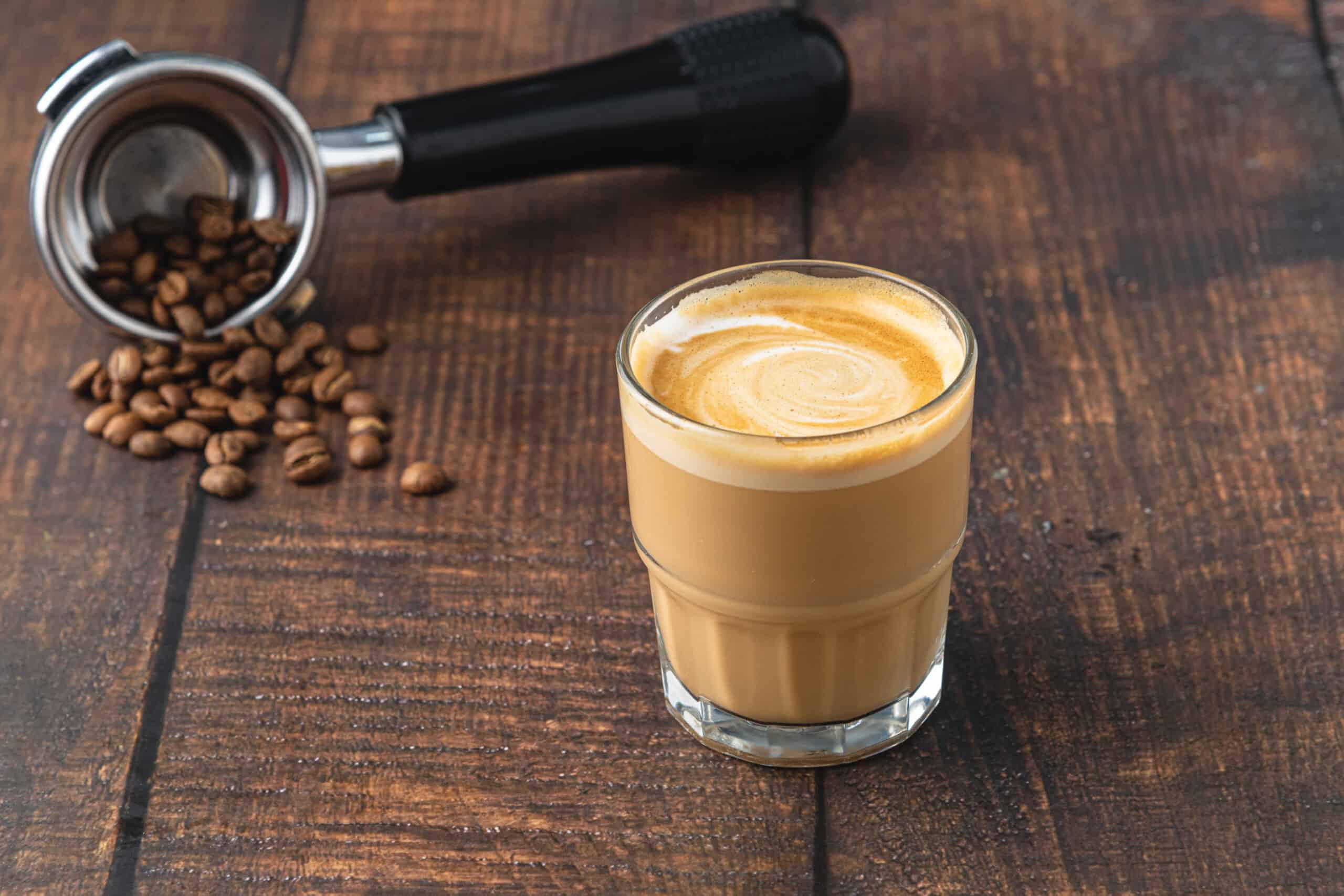 Espresso is sure to get you motoring, and with options like Gibraltar or cortado, you don’t have to stick to the same type of espresso-based coffee all the time. What are the differences between Gibraltar and cortado coffee?

Cortado coffee is made using the same amount of espresso and milk in a 1:1 ratio. A Gibraltar features one double shot of espresso and at least one ounce of milk but usually two. There’s even a specialty glass called the Gibraltar for serving this espresso beverage.

The cortado and Gibraltar are oft-confused for one another, as some people think they’re the same beverage (they aren’t). If you have lingering questions about these espresso-based coffees, this guide will seek to answer them all. Make sure you keep reading!

What Is Gibraltar Coffee?

Before we examine their differences, let’s begin by explaining both Gibraltar and cortado coffee separately. We’ll start with Gibraltar coffee.

Gibraltar might have an exotic-sounding name, but it originates in the United States, specifically San Francisco.

There, Blue Bottle Coffee Company began serving a cortado-like beverage in a tapered glass produced by the Libbey Glass Company.

The name of the glass? The Gibraltar, of course.

This rock glass could hold 4.5 ounces of fluid, which is a little smaller than your average coffee mug. That has a fluid capacity of 4.75 ounces.

The name of the glass inspired the owner of the Blue Bottle Coffee Company to make a coffee for the Gibraltar glass. In 2005, the San Fran cafe served the first Gibraltar espresso-based coffee.

As mentioned in the intro, the beverage features one portion of espresso, but it’s a double shot rather than a single shot.

Although Gibraltar can be served with an ounce of milk, it’s more common to pour two ounces of milk instead. The ratio then would be 2:1 with two parts milk and one part espresso.

Of course, the Gibraltar beverage caught on like wildfire around San Francisco. It wasn’t too long before the drink spread outside of California to the rest of the country and even to other parts of the world.

Today, the Gibraltar has cemented its place in coffee history.

What Is Cortado Coffee?

We recently wrote about cortado coffee here on the blog, so this introductory section will largely recap the information in that article.

The cortado is an espresso-based coffee that comes from Spain. The specific origins aren’t exactly known, but it’s believed that the cortado came from Madrid, as it’s a very popular coffee beverage there.

The word cortado itself is sourced from a Spanish word that means to cut, cortar. In other words, you’re supposed to use milk in the cortado to cut through the acidity of the espresso or dilute it.

A cortado features a shot of espresso and warm milk in equal quantities. The ratio is 1:1, with one part espresso to one part milk.

The texture of the milk is as important as its temperature. To get the milk hot, you should steam it. It should never have a texturized or frothy feel like a latte. There’s no milk foam at the top of this beverage.

Rather, the cortado will have a beautiful tan color thanks to the presence of the milk and a creamy, smooth flavor. It too is a very beloved espresso, even if you don’t see it on many café menus.

Are Gibraltar and Cortado the Same Drink?

To reiterate, Gibraltar and cortado are different! Plenty of websites online refer to the two drinks as the same when that’s simply inaccurate.

Rather, Gibraltar is a variation on the cortado just as the Spanish-based café cortado is or the Cuban cortadito is.

A café cortado is an espresso with just a dash of milk rather than the same amount of milk as in the espresso. A cortadito features a 30-milliliter espresso shot and warm, sweetened condensed milk rather than steamed milk.

Just because those drinks are made with milk and espresso does not make them a cortado, just as a Gibraltar is not a cortado.

To lump Gibraltar in as a cortado is a disservice to Gibraltar coffee. We would say that about the café cortado and cortadito as well.

It’s the subtle differences that make these espresso-based coffees what they are. Those differences should be celebrated, not eschewed!

The Differences Between Gibraltar and Cortado Espresso-Based Coffee

Now that you’ve been introduced to both Gibraltar and cortado, it’s time to explore the differences between these two espresso-based coffees.

The Amount of Milk

You’ll recall from earlier in this article that a cortado features the same amount of steamed milk as espresso in an equal 1:1 ratio.

A Gibraltar might feature an ounce of milk, but two ounces is the norm. That’s a 2:1 ratio with more milk than espresso.

The Type of Glass Used to Serve the Espresso-Based Coffee

The other difference between the cortado and Gibraltar comes down to presentation.

You can serve the cortado in any glass or mug that you wish. Depending on the cafés you visit, you might see cortados served in glasses of all styles. There’s no one set type of glass needed to make a cortado a cortado, after all.

That is not the case with Gibraltar. Remember, the name of this espresso-based coffee comes from a Libbey Glass Company glass, so without a Gibraltar glass, a Gibraltar just isn’t a Gibraltar.

The rocks glass is slightly smaller than a coffee mug and features a tapered bottom. A café that’s serving a Gibraltar properly should always use a glass that meets those requirements.

Maybe it doesn’t have to come from Libbey Glass Company, but it should otherwise be hard to tell apart from the original Gibraltar glass.

What You Need to Make Either Coffee

While some of the items are the same when making Cortado and Gibraltar Coffee, the chart below will give you a quick and easy comparison.

How to Make Gibraltar Coffee

You’d like to try making a tasty Gibraltar espresso-based coffee at home. How is it done? Here’s what you’ll need:

Now let’s go over the steps to prepare this San Francisco sensation.

You’ll need espresso roast coffee beans to make both Gibraltar espresso-based coffee and the cortado. If you don’t have these beans, then head to your local café or grocery store and buy some.

You can also shop for espresso roast coffee beans online from your favorite retailers, whether those are sites like Amazon or an online coffee supplier.

You’ll need 18 grams of coffee beans for a double shot of espresso, which is the requirement of Gibraltar coffee.

Step 2 – Pack the Grounds, Then Tamp

Your espresso machine should have a portafilter, which we discussed in our article on cortado coffee. It’s sort of like a basket.

Then tamp down the grounds, pressing to distribute the pressure to the grounds from the top to the bottom. You want to create straight, even grounds when tamping to ensure the espresso is rich and flavorful.

Set aside the espresso for now once you’re done.

Most espresso machines can also steam milk, so when you’re finished brewing espresso, switch to the steaming feature on your machine now. Whole milk will produce a rich, creamy flavor.

You only need ¼ cup of milk for Gibraltar coffee.

Step 5 – Pour the Espresso, Then the Milk

While the milk steams, take your Gibraltar glass and warm it for five minutes by running it under hot water.

When the milk is hot and ready, pour the espresso first into the Gibraltar glass and then the steamed milk. Serve immediately!

How to Make Cortado Coffee

In our post about cortado coffee, we discussed the steps to brew this Spanish-based espresso at home. Per that article, here’s what you need.

Okay, it’s time to get started!

Given how close the cortado and Gibraltar espresso-based coffees are, it’s unsurprising that the first steps will closely mirror one another.

As you did before, you want to grind the beans to a fine texture. You can always buy pre-ground espresso roast beans if you’re short on time and want to get to the part where you drink your cortado sooner.

In the next familiar step, pack coffee grounds in the portafilter and then tamp them to deliver the full depth of flavor in your espresso.

Even if the steamed milk in a cortado cuts down on the acidity in espresso, you want the drink to be otherwise strong and flavorful.

You only need four ounces of grounds to make cortado coffee.

That’s right, you can again rely on your espresso machine to steam the milk to the perfect temperature and consistency.

If you can’t use your espresso machine to steam the milk, you can always make it in the microwave or boil milk on the stovetop.

We detailed your options in our guide on cortado coffee, so please check that out if you missed it.

Step 5 – Heat Your Mug or Glass

You don’t want to pour a cortado into a cold glass or mug because the coffee will rapidly begin to cool. Run the mug under hot water for several minutes until the glass feels nice and steamy.

Step 6 – Pour the Espresso, Then the Milk

The espresso goes into your cup or mug first, followed by the milk to cut the acidity. Then the drink is done. Serve right away!

Which Is Better, Gibraltar or Cortado Coffee?

Since the Gibraltar and cortado espresso-based coffees are two sides of the same coin, it’s hard to say which one is better.

Ultimately, it comes down to your preferences. Cortado has more milk, so it will contain less acidity. If you’re someone who doesn’t like an overly acidic cup, or if you have acid reflux, then cortado coffee is a suitable beverage for you.

Gibraltar coffee would allow more of that acidity to come through, but the beverage is still sweetened with milk, so it’s not like you’re ever at risk of drinking a bitter cup (unless you make a brewing mistake, that is).

If you ask us, we have to give it to the coffee that started it all, the cortado. Without the cortado, we wouldn’t have Gibraltar coffee, and that’s a fact.

Gibraltar coffee is a variation on cortado coffee but is by no means the same beverage. Cortado uses the same amount of milk as espresso, whereas a Gibraltar does not. That caffeinated beverage is also always served in a special Gibraltar glass.

If you have yet to try a cortado, treat yourself to one of those first. You might find that it’s now your favorite way to drink espresso!

Then expand your horizons and enjoy the other cortado varieties, some of which are drunk black, others of which use sweetened condensed milk rather than regular milk, and some still which are the Gibraltar.

Have fun and happy sipping!

What Is a Cortado Coffee?