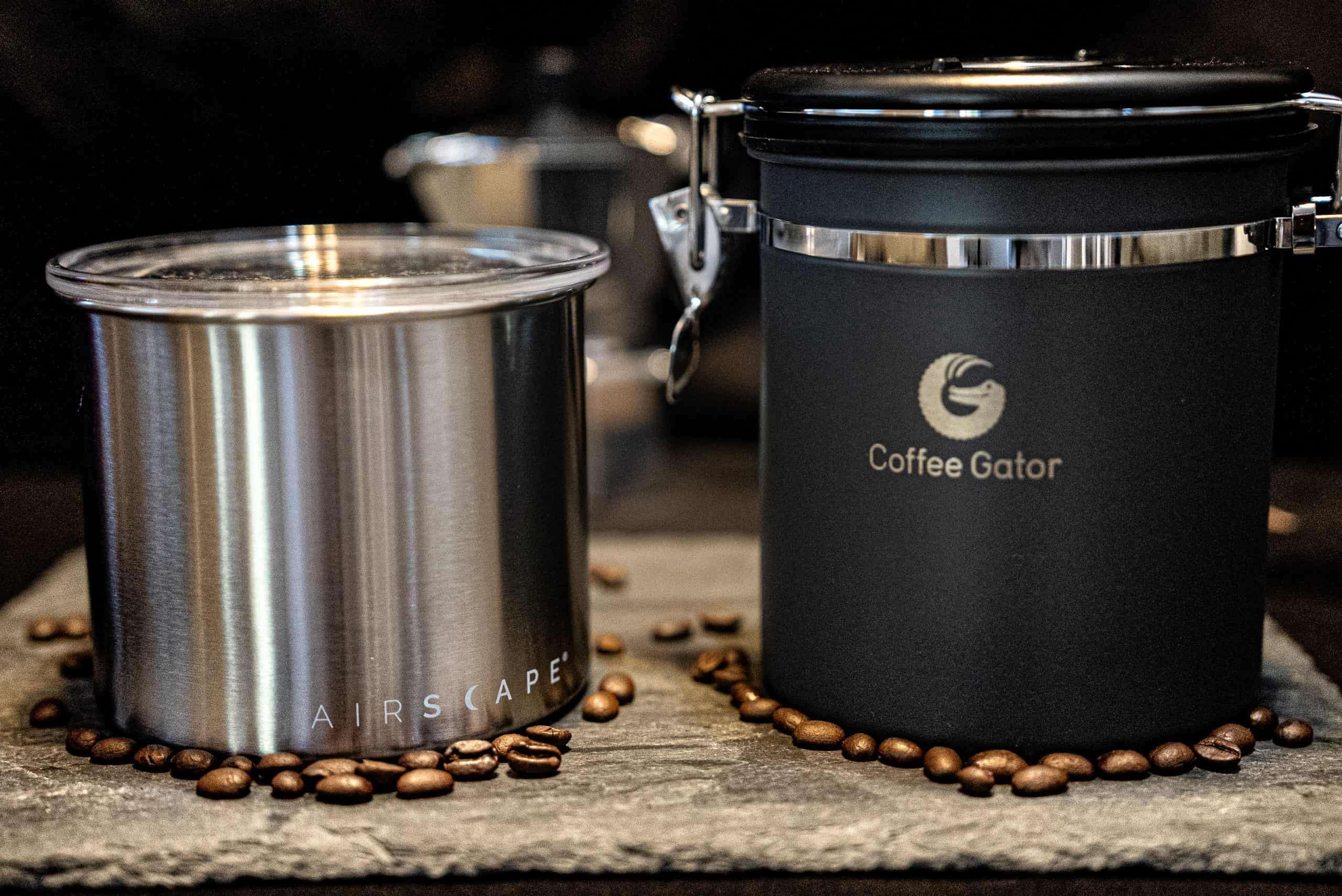 High-quality coffee is something you’re very passionate about. Beyond the type of coffee beans you choose and which brewer you use, where your store your coffee can also dictate its depth of flavor. You’re looking for a coffee canister, but you’re stuck between Coffee Gator and Airscape. Which is the better pick?

Between Coffee Gator and Airscape, Coffee Gator is the preferred option for many. Their canister prevents oxygen from getting in while allowing carbon dioxide to release, which Airscape’s canister doesn’t. Coffee Gator promises fresh coffee grounds for a month thanks to their canister’s locking lid.

In this article, we’ll talk more about Coffee Gator, then Airscape. Then we’ll pit them head-to-head to determine which will keep your coffee fresher and tastier. Coffee lovers will not want to miss this one!

What Is Coffee Gator?

Let’s start with Coffee Gator, the more renowned coffee canister of the two. The Coffee Gator brand was founded by Phil Williams, a man who had been an instant coffee drinker for most of his adult life.

Then he went hiking in Colombia and experienced the richness and boldness you can only find in authentic Colombian coffee. From there, he was hooked. When Williams returned from his hike, he found that instant coffee just wouldn’t do anymore.

Soon after, Coffee Gator was born.

Of course, for this part of the article, we’ll discuss only Coffee Gator’s coffee canister.

The Coffee Gator canister is a stainless steel contraption that does more than merely hold your coffee. It also comes with built-in tracking functionalities that determine how fresh the coffee beans or grounds are.

How does it do this, you ask? The canister features a calendar wheel atop its lid. You input the expiry date of your coffee grounds or the day you first put them in the Coffee Gator. The canister will then track the days as they go by so you don’t have to.

As coffee beans and grounds sit in storage, did you know they release carbon dioxide? It’s true! This is problematic for a few reasons, though.

For starters, carbon dioxide contributes to the greenhouse effect, which means the gas increases the rate of global warming. Since global warming is already such a severe problem, worsening it in any way is not advisable.

Much less severely, the presence of carbon dioxide can also lead to bubbles when you brew your coffee. The reason is that roasting coffee beans causes carbon dioxide to come out.

The Coffee Gator container lets out carbon dioxide so the gas doesn’t affect your coffee. Even better is the canister will prevent oxygen from getting inside so your coffee grounds or beans stay fresher for longer.

With an airtight lid, a lift bail clasp, and layers of stainless steel, the Coffee Gator container is high quality through and through. The rubber seal that encircles the lid is made of BPA-free plastic so you don’t have to worry about whether the Coffee Gator is safe.

Coffee Gator even includes a measuring scoop with their container so you have everything you need to easily scoop and store your coffee. All this for a canister that costs under $30!

Airscape canisters are a product by a company called Planetary Design, which was established in 1992. The team that came up with the concept for Planetary Design was hiking in Montana and wanted higher-quality coffee than what their hiking conditions afforded them.

The Airscape coffee canister is what we’ll focus on. It too is stainless steel, although you have your pick of exterior finish options. Those options are smooth matte paint, gloss paint, or brushed steel. The 18/8 restaurant-grade steel that Airscape uses is food-safe and sure to stand up to everyday use.

The patented lid of the Airscape canister prevents air from getting into your coffee beans once you seal it shut. The lid and other parts of the Airscape are BPA-free. That includes the padded bottom, which is made of rubber. You won’t have to worry about your container skidding or sliding thanks to the rubber bottom!

Anti-stain, Planetary Design does recommend that you wash the Airscape coffee canister in the sink by hand rather than clean it in the dishwasher.

The Airscape comes in several sizes. The small is five inches wide by four inches tall and can store eight ounces of whole coffee beans.

The medium measures five inches wide by seven inches tall and will keep a pound of whole-bean coffee.

You can select from a variety of fun colors whether you get the matte, glossy, or steel finish. Here are your options:

The Airscape container costs $27 to $32 depending on the size you buy.

Yet one of the two products is the clear winner, and that’s the Coffee Gator. Here’s why.

The Airscape coffee canister is only available in small and medium sizes. This isn’t such a big deal if you only need to store small quantities of coffee grounds or beans, but what if you have a large amount? You might not be able to fit in all in the medium Airscape.

You can buy the Coffee Gator canisters in small, medium, or large sizes, and that’s very much a difference-maker. The large canister, as you’ll recall, is nearly eight inches. It can hold about 20 ounces of coffee grounds and roughly 23 ounces of coffee beans.

Although it sounds impressive that the medium Airscape canister can store a pound of whole coffee beans, if you convert pounds to ounces, that’s only 16 ounces. You’re missing out on seven ounces of storage potential by choosing the Airscape.

This next one is a small thing, admittedly, but Coffee Gator includes a free scoop with the purchase of one of their canisters. Airscape does not. You can buy a scoop separately for $8, but the Airscape canister is already more expensive than the Coffee Gator, so tacking on almost $10 more to your order doesn’t help things.

The real reason that many coffee aficionados have ranked Coffee Gator canisters over Airscape is due to one feature: the carbon dioxide release valve. Blocking out oxygen is not enough if you want a pure, delicious cup of coffee. You also have to prevent carbon dioxide from affecting the beans.

Only the Coffee Gator canisters can do that. Airscape has no competing feature.

The expiry tracking feature is also something that Airscape coffee canisters lack. Admittedly, not all Coffee Gator containers have this feature by default. The fact that date tracking is available at all though gives the Coffee Gator another clear advantage over Airscape.

We people get forgetful, but your Coffee Gator canister never will. You can rely on it to let you know when your coffee beans or grounds are about to expire so you can use them before that. This saves you lots of money that you’d lose to expired grounds throughout the year.

Is Having a Coffee Canister That Important?

Whether it’s the Coffee Gator or Airscape, do you really need a coffee canister for your grounds? Maybe not if you’re storing your coffee to roast it tomorrow morning. For prolonged coffee storage though, we’d say yes, absolutely.

Here are the benefits of using a coffee container.

Moisture such as condensation in your fridge is one of coffee’s worst enemies. Humidity, which is moist air, is just as bad. The freshness of your coffee will disappear in a hurry, making it taste old. What’s worse is that if the moisture levels are bad enough, your coffee beans or grounds can develop mold!

The sun can also destroy the integrity of your coffee. It will make fresh beans stale, so opaque storage containers are your worst option. With a stainless steel body such as the Coffee Gator or Airscape containers, you won’t have to worry about sunlight penetrating through.

As we touched on in the earlier sections, oxygen is one of the biggest opponents of fresh coffee grounds. When oxygen seeps into a container, it reduces the quality of your coffee. Airtight seals like those offered by Coffee Gator and Airscape make oxygen a non-issue.

The Coffee Gator and Planetary Design Airscape are two of the most renowned coffee storage containers, but the Coffee Gator has several advantages over the Airscape. For one, the Coffee Gator features a carbon dioxide vent. Second, it also indicates when your coffee beans or grounds are going to expire.

Using a stainless steel coffee container can prevent light, heat, and air from getting in, so whether it’s the Coffee Gator or the Airscape, one of these containers is very much worth having!