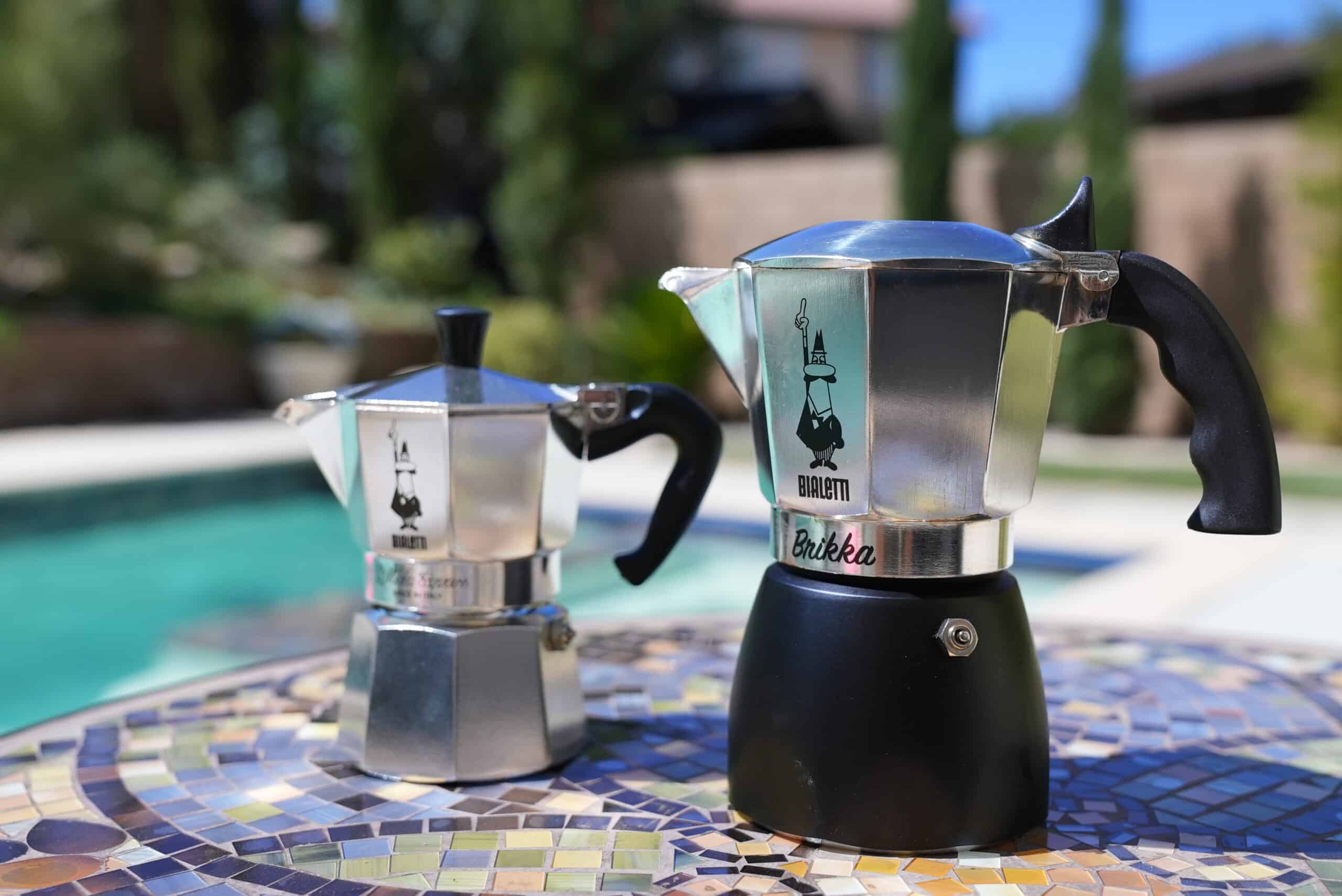 You need a new coffeemaker and the Bialetti brand comes highly recommended. You’re torn between the Brikka and the Moka, two of Bialetti’s best-selling coffee machines. Which unit is the better pick?

The Bialetti Brikka and Moka, both being from the same manufacturer, have a lot in common, but a few key differences make the Brikka the better pick. It has an espresso crema feature, and it brews slightly faster.

We’re sure you want to come to your own conclusions, which is why we’ll review first the Brikka and the Moka individually. Then we’ll compare their similarities and differences so you can find the best Bialetti coffeemaker for you!

What Is the Bialetti Brikka?

The Bialetti Brikka is a stovetop espresso maker. You can shop for a two-cup version, but for the sake of fairness, we’ll look at both a four-cup Brikka and a four-cup Moka. Here’s the link for the Brikka.

Let’s just get right to the best part, which we talked about in the intro. The Brikka includes a silicone membrane-covered column that produces rich, frothy, delicious crema coffee. Without the crema, is what you’re drinking even really espresso? If you care about the quality of what’s in your cup, then the answer would be no.

That the Brikka allows you to enjoy café-quality coffee crema every time is what has made this coffee machine so beloved. Yet that’s not its only feature by far.

The Brikka also features a pressure control system that adjusts the water flow pressure that reaches your coffee grounds. This enhances the flavor and creaminess of your espresso even more.

This coffeemaker also has a flip-up top for easily accessing your coffee, a side-pour spout, and a lid that opens to allow condensation to exit. It takes between four and five minutes to brew four cups of coffee if each cup is two ounces.

The looks of the Brikka are a standout as well. This polished aluminum coffee machine boasts the octagonal shape that is the Bialetti trademark. The unique shape is for more than just brownie points, though. The Brikka is also masterful at heat diffusion so you smell the amazing aroma of brewing coffee and not the heat.

Using the Brikka is about as easy as can be. First, open the lower chamber and pour in cold water, stopping before the valve. Then add your funnel, running the ground espresso through the funnel. No coffee grounds should be on the edge of the funnel.

Next, put the pot’s upper part onto its base, screwing it in until it’s secure. Move your Brikka to your stovetop and let the water within the coffeemaker come to a boil. You’ll hear the coffee gurgle as it exits the center post.

Two minutes after this happens, the coffee will begin trickling, then it will make a puffing sound. This is the coffee frothing, which is done in about four seconds. After the pot is full of coffee, turn the stovetop heat off and carefully move your Brikka.

Using a spoon, mix the ingredients in the upper chamber, stirring the coffee layers to equalize them. Then you can pour and drink!

What Is the Bialetti Moka?

Next, let’s look at the Bialetti Moka. This coffeemaker features an anti-scald, ergonomic handle that you can safely grip when pouring coffee. The safety valve within the machine is another feature that prevents burns and other mishaps.

Using the Moka is about as convenient as the Brikka. First, you choose a coffee blend within Moka’s many options. Then you add the coffee grounds to the filter, but make sure you don’t press down on them. The coffee grounds will make a gutter that keeps dust from exiting the boiler’s edges and altering your coffee’s flavor.

Next, close the pot and put the collector onto the boiler by screwing the pieces on. Then place your Moka on a hot stovetop. The flame from the stovetop should be sizable enough that it covers the bottom of the coffeemaker but not the whole Moka machine. This prevents coffee bean extraction from happening too fast.

The Moka will gurgle, which tells you that the coffee is ready. Turn off the flame at that point and safely remove your Moka from the stovetop. Bialetti again recommends stirring to get more of the full-bodied flavor from your Moka coffeemaker.

Brikka vs. Moka: Similarities and Differences

By this point, you’re much more familiar with the Bialetti Brikka and Moka. Let’s now compare the two, as this will help you start to make up your mind about these two coffeemakers.

Bialetti felt no need to reinvent the wheel when it came to making the Brikka coffeemaker (yes, the Moka came first and is a long-time Bialetti staple). Looking at one coffee machine and then the other, you’d be hard-pressed to come up with differences between the two.

Well, except for the names of the coffeemakers, which are etched into each respective machine. Those clearly spell out which model you own, either Brikka or Moka.

Unlike most coffee machines, which require you to plug them in to brew your coffee, both the Brikka and the Moka use your stovetop to heat up the water and boil your beans. These features make the two Bialetti coffee machines quite portable. You could bring them with you to work or even travel with them if you wanted to.

There’s no real advantage to choosing the Moka over the Brikka or vice-versa if you care about coffeemaker capacity. Both can brew two, four, or more cups of coffee depending on the model. As a reminder, the coffeemakers we highlighted today produce up to four cups at a time.

Since these Bialetti coffee machines share many of the same parts, their cleaning protocols don’t really differ. Bialetti suggests only mild dish detergent for the Brikka and Moka to prevent ruining the aluminum. They also recommend you use a liquid chrome polish if you want your coffeemaker to look as shiny and new as the day you first took it out of the box.

We know we’re splitting hairs here, but the brew times between the Brikka and the Moka are not identical, so we had to talk about it. The Moka brews coffee in four to five minutes while the Brikka does the same in three to four minutes. The reason you get that minute faster brewing speed is due to the dual valve system and increased internal pressure of the Brikka.

Here’s the biggest difference of all. Both the Brikka and the Moka make delightfully tasty espresso, but only one produces the frothy goodness of espresso crema, and that’s the Brikka. Yet despite that the Moka doesn’t froth up your coffee, it still doesn’t brew faster, which is something to keep in mind.

The Bialetti brand is Italian, but not all their coffee machines are. Since the Moka is a long-standing part of the Bialetti family, as discussed, its origins are clear. You only have to look at your coffeemaker to see the “made in Italy” stamp right front and center.

Yet the Brikka doesn’t have the same feature. Do you want to know why? It’s not made in Italy, but Romania instead. The Brikka is still a Bialetti product, but it’s less authentically Italian than the Moca.

Another significant difference between these two coffee machines is their price. The Moka retails for around $45, which is astonishingly affordable considering the Italian heritage and the features of this coffee machine. The Brikka is about twice that at $100. Yet remember, it has an espresso crema mode, which explains the uptick in price.

Bialetti Brikka or Moka – Which Is the Better Unit for You?

You have all the facts on the Brikka and Moka, so now it’s time to decide which will be your next coffeemaker. To do that, you have to determine what matters most to you when shopping for a new brewer.

If you care about saving money, then the Moka makes more sense. We’ve seen it available for under $45 online. For example, the Amazon link we shared earlier has the coffeemaker for around $35.

Unlike most coffeemakers in that price range, the Moka is a great value. You’ll impress your friends and family with this coffee machine on your counter and wait until they taste the espresso the Moka can make!

If you want that true espresso every morning with the cream and everything, then you have to buy the Brikka. It’s the only Bialetti coffeemaker of the two that has the espresso crema feature.

For those who want the bragging rights, the authentic Italian origins of the Moka will give you plenty to talk about.

What if you’re busy and you only have a few minutes in the morning? Then you can choose either of the two Bialetti machines. The difference in brewing times between these coffeemakers is so negligible that there’s no need to pick the Brikka just to save an extra minute.

The Bialetti Brikka and the Moka are two standout coffeemakers. The Moka is true-blue Italian, but it doesn’t have an espresso crema mode like the Brikka does. Between the two, you can’t choose wrong!